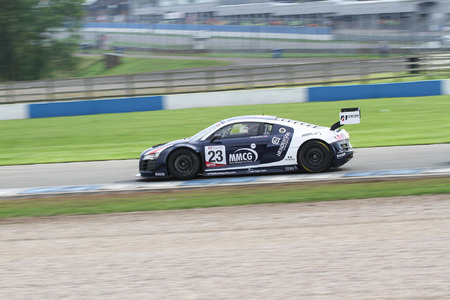 Phil Burgan and the Audi R8 LMS ultra ran as high as second in the pit stop race, having qualified fifth earlier on Saturday morning (19th September). The nature of the GT Cup championship allows professional drivers to take to the wheel in the second half of the 50-minute race, which meant Phil finished sixth – the highest placed single driver entry – with five pros filling the top-five places.

Phil qualified third on the grid for the first of the two sprint races on Sunday (20thSeptember), setting a blistering time with only a minute to go on his last lap of qualifying. After another good start, Phil was battling side by side with the Ferrari in second, but as the lead three jostled for position, Phil had to take avoiding action as one of the cars ahead braked earlier than expected, sending Phil into a spin and into the gravel. After being rescued from the gravel, Phil continued the race, having to set a time to determine his position on the grid for the final race. Although the Audi was not classified as finishing, Phil qualified seventh for the final race.

Phil had another good start to the third race, making up three places to fourth by lap three, until contact with the Lotus into the chicane and the Audi dropping into a false neutral gear, dropped Phil to seventh on lap four. Phil had a good fight back up to sixth, and held off professional driver, Adam Wilcox in another Audi, at the chequered flag.

United Autosports will now prepare for the final two GT Cup rounds at Oulton Park on Saturday 10th October. They will also be making their way to Misano, Italy, for the final round of the GT Sports Club on 3-4 October.

“I was pleased I managed to qualify third on Sunday, but I got on the kerb on the first lap of the race, having to avoid running into the car in front, and I just spun. I thought I drove quite well in the pit stop race too, even if I do say so myself. I was setting good times and went from fifth to second and managed to hold onto second until the pit stop, then the pros came out! Overall, I was pleased with my pace, but Sunday’s races weren’t the best for us.”

“We’ve been quick at Donington at the start of the season and we were quick at the weekend too but it just hasn’t worked out. Phil put in a great lap to qualify third on Sunday morning but Donington hasn’t been our venue this year. Two sixth place finishes isn’t a lot to come away with. There’s one more round left at Oulton Park and there’s still chance to grab that first win.”