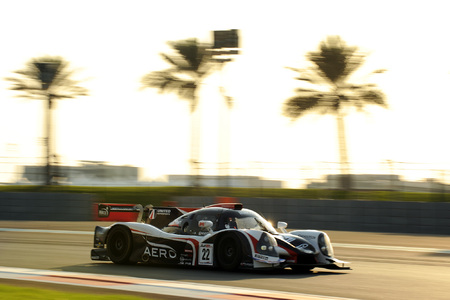 United Autosports have confirmed that Jim McGuire and Matt Bell will team up for the 2017 Michelin Le Mans Cup in the AERO Advanced Paint Technology Ligier JS P3.

Jim McGuire rejoins United Autosports after making his debut with the team at the 2016 Gulf 12 Hours in Abu Dhabi in December. He scored a podium finish alongside teammates Matt Kegan, Nico Rondet and former F1 driver Stefan Johansson.

United Autosports regular, Matt Bell, will join Jim in the Ligier JS P3. Matt has featured as a valuable part of the United Autosports family for six years, joining the team when they entered their first year of racing in 2010. In 2016 he raced for them in the European Le Mans Series, finishing fourth in the championship alongside Mark Patterson and Wayne Boyd. Matt has also raced the team’s Audi R8 LMS ultra in the British GT Championship for many years, finishing second in the 2013 championship by 1.5 points.

The livery for the Ligier JS P3 will be created using AERO Advanced Paint Technology. AERO is an innovative new way to apply paint and is environmentally friendly, lightweight and durable.

Each Michelin Le Mans Cup race is two hours long and is held on the Saturday afternoon, with two free practice sessions and a 15-minute qualifying session throughout the weekend.

“I am really excited to be racing with United Autosports this year in the Michelin Le Mans Cup. I had an amazing experience driving the Ligier JS P3 at Yas Marina in the Gulf 12 Hours – standing on the podium next to Stefan Johansson is a gentlemen driver’s dream come true and to be able to drive this car at the epic tracks of Europe this year is indescribable. I’m really pleased to be able to introduce AERO Advanced Paint TechnologyTM into the UK & Europe in partnership with United Autosports as well. The Ligier JS P3 is such a magnificent car and our AERO Advanced Paint TechnologyTM  gives us a competitive advantage through appearance, durability and weight savings. And, moreover, our environmentally friendly paint is better for Europe and better for the planet.”

“I’m really excited to be back with United Autosports. I’m looking forward to working with Jim throughout the year. The Michelin Le Mans Cup looks like a really exciting championship – we were watching it last year during the ELMS weekends and there were some great battles going on with the GT cars. Now LMP3 has been added into it I think it will still be really exciting and competitive series. We get to go to Le Mans and we get two one-hour races this time, so we will get some really good running there and who doesn’t want to do that! I’m really looking forward to going racing again with United Autosports – it should be a good year.”

“I’m thrilled to welcome Jim to the team full time for 2017. We had a great time with him in Abu Dhabi and I’m sure this year will be no exception. I’m pleased Matt will be with us again too. He’s quick, reliable and great to have around, so I’m sure the pair of them will form a fantastic partnership throughout the year.”