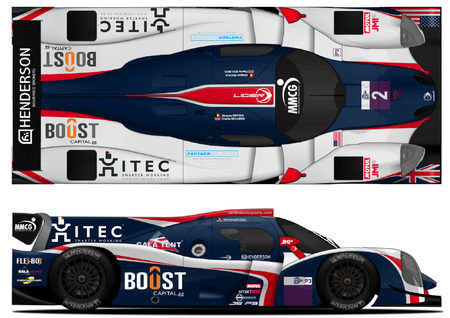 United Autosports have confirmed their third driver pairing for the inaugural Prototype Cup at Snetterton on 8-9 October.

Jacques Duyver and Charlie Hollings will join the team in one of their Ligier JS P3 sports prototypes for the British Prototype Cup.

Jacques has raced GT machinery in the Gulf 12 Hours, British GT, GT Cup and the Dubai 24 Hours. He has also raced in the Ferrari Challenge Europe and Ferrari Challenge World Final but has never raced a prototype. Charlie is no stranger to prototype racing as he has raced LMP1, LMP2 and LMP3 sports prototypes as well as notching up numerous races in GT3 cars in the UK, Europe and overseas. In 2015, Charlie was crowned GT Cup champion in a 458 Ferrari.

Jacques and Charlie will attend United Autosports’ exclusive test day at Snetterton on 3-4 October in the lead up to the race weekend.

As part of their role as Onroak Automotive UK agents, United Autosports have arranged exclusive test days for prospective Ligier customers and Prototype Cup entrants. The next two-day test at Snetterton is 3-4 October. Anyone wishing to book onto the test should contact Richard Dean on Richard@unitedautosports.com or +44 (0)7850 350 296.

“United Autosports is a team I have become very familiar with over the last few years while competing in GT racing and has always been an example of one of the best teams in the paddock. I had the pleasure of attending the opening ELMS round at Silverstone earlier this year and was amazed to see a grid of 22 Ligier LMP3 cars. Knowing some of the drivers of the LMP3 cars, I was impressed with all their positive feedback on the car. Mark [Patterson], who I have come to know over the last few years, kindly took the time to show me around the new LMP3 car. I also bumped into Phil [Boland] from Bute Motorsport, who I knew from competing in the GT Cup and he told me that Bute were planning a series for the new LMP3 cars. With names such as Ligier, United Autosports and Bute Motorsport, I am delighted to be part of the inaugural British Prototype Cup event, and I have the pleasure of driving with Charlie Hollings, who has helped me as a driver since my inception into this fantastic world of motorsport.”

“It’s great to be joining United Autosports for the first British Prototype Cup race. I have know Richard [Dean] and many of the team since I started racing but never had the opportunity to drive with them, so now it’s nice to finally be part of the team. United Autosport have been the stand out team this year in LMP3 in ELMS and have already clinched the LMP3 title with a race to spare, so this is without doubt the best place for Jacques and I to be.

“Having won the overall GT Cup Championship last year and also leading the first ever LMP3 race in ELMS, it’s nice to team up with Jacques, who I know very well from racing and coaching together, and join the new Prototype Cup event. I’m sure the Prototype Cup will continue to grow and be a big part in British Motorsport.”

“I’m pleased to welcome Jacques and Charlie to the United Autosports team along with all six of our drivers for the Prototype Cup event. They should be a great pairing, having worked together before. The Prototype Cup is shaping up to be a great event. I’d encourage anyone wanting to race a prototype to get in touch and enter this brilliant event.”