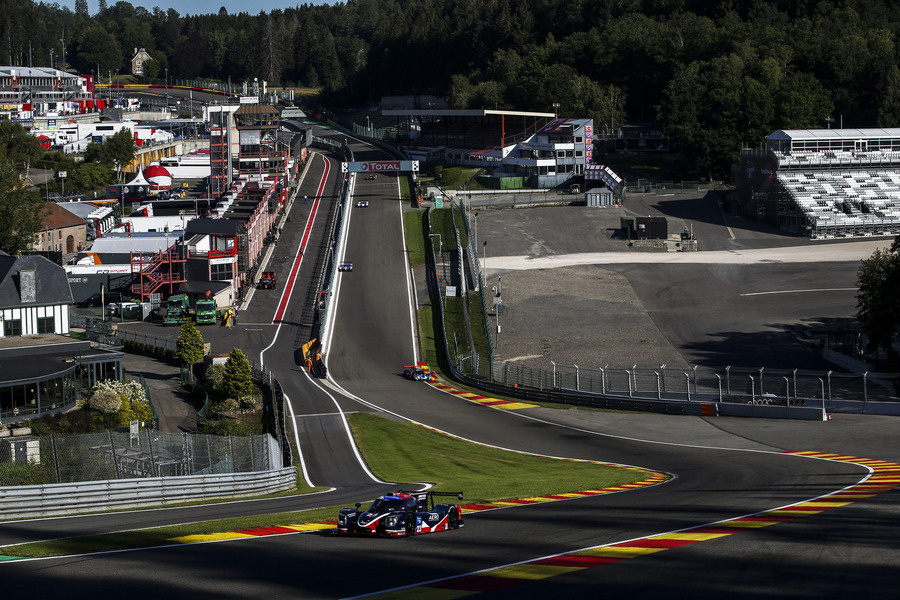 After a delayed start, the Le Mans Cup race got underway in very hot ambient temperatures. John Schauerman (#23) and Daniel Schneider (#24) started the race in ninth and 10th, after qualifying earlier in the day.

Both drivers had good, clean starts, maintaining their starting positions and getting stuck into the race. John made a fantastic move to take eighth place, while Daniel was scrapping with the cars behind him. After dropping a few places, a great move by Daniel to take P11 saw him get his rhythm back. Unfortunately, a collision with a GT car marked the end of the race for the #24 car before the end of the first hour.

With just over an hour left to run, John pitted the #23 from eighth to hand over to Wayne Boyd. A great pit stop by the team saw Wayne re-join in seventh place. Before long he had moved up into fifth, setting fastest lap after fastest lap. Wayne began to catch the fourth placed car, reducing a 30-second gap to seven seconds before the second round of mandatory pit stops began.

With 11 minutes left to run, Wayne pitted the #23 for fuel only and made his way back out to finish the race. He passed one more car to take fourth place with six minutes of the race remaining, bringing the #23 home a fantastic fourth after two hours of racing, including getting the fastest lap of the race too.

The next round of the Michelin Le Mans Cup will be held at Paul Ricard, France on 28-29 August.

“Fourth place is my best result. I think the credit really goes to Wayne as he killed it. I was happy to bring the car in for the pit stop and get the driver change done and Wayne is so fast, watching him catch up to people and pass them is incredible, he’s such a good driver. I did my bit and I didn’t make any big mistakes. I was pleased that I could run decent laps and I was happy with my stint. It was a great day and my personal best result as a team mate so a huge thanks to United and Wayne for that.”

“Absolutely fantastic race for us. I’m really happy for John and all the boys. We qualified ninth so to gain five positions on our starting position with no safety cars or FCYs was pretty impressive. John did a great job in his stint and kept it very consistent with good lap times and kept it in one piece. Fastest lap was also nice to get. We will be pushing for a podium at Ricard. The United car was absolutely fantastic today.”

“Up to the race we had a good weekend. I was learning more about the car – I’m a rookie so I have to keep learning. But I’m not sure what happened in the race. I was disappointed with my performance in qualifying so I think I put too much pressure on myself going into the race. I had a good start, but I was cautious as John was next to me and I didn’t want to take my team mate out! I made a silly mistake overtaking a GT car, I was keen to make a move and do something but it didn’t end well. I am looking forward to going back to Paul Ricard though as we had good pace there.”

“Obviously, it’s a shame not to finish the race but in multi class racing sometimes these things happen. It’s been a top job by everyone at United Autosports again this weekend the cars been super-fast so I’m looking forward to Paul Ricard where we in the fight for a good result last time so hopefully we can build on that.”

“I’m really pleased for John and Wayne today – they both did a great job. Daniel was unlucky but I’m sure him and Andy will come back from this and put in a great performance at Paul Ricard at the end of the month.”

“John and Wayne did a fantastic job today in the Le Mans Cup race. I’m so pleased for John as he brought the car into the pits for Wayne to take over after doing his job perfectly. This was his best result and I’m pleased United could be a part of that. Daniel and Andy had also done a good job this weekend but it just wasn’t to be in the race. Daniel is doing very well for someone who has never raced an LMP3 car or at some of the tracks we visit so I’m feeling good about returning to Ricard in a few weeks.”