United Autosports makes another step towards achieving its goal of competing in the legendary Le Mans 24 Hours when the Anglo-American team contests the inaugural Le Mans LMP3 race that supports this year’s legendary sportscar endurance race in France with a two-car entry. Ex-Formula One driver and former Le Mans 24 Hour race winner Martin Brundle and Christian England will drive an MMCG/Richard Mille supported Ligier JS P3 in “The Road to Le Mans” race on Saturday (18 June). The duo will be joined in a second Ligier by American duo Guy Cosmo and Mike Hedlund in the 60-minute, two-driver race that precedes this year’s twice-around-the-clock Le Mans race.

Brundle is an eight-race Le Mans “veteran” while England, having won the opening two European Le Mans Series races with Alex Brundle, son of Martin, along with Mike Guasch, leads the ELMS LMP3 championship standings, has never previously been to Le Mans. The same applies to both Cosmo and Hedlund, the latter having won his class in the recent ELMS race at Imola.

Florida-based Cosmo has raced exclusively in North America for over 13 years and is a former American Le Mans Series “Rookie of the Year” and multiple race winner. Guy is competing in the IMSA Series and Pirelli World Challenge this year. Apart from a handful of Scandinavian Formula Ford 2000 races 16 years ago, Le Mans marks Guy’s first race outside North America as a professional race driver. Pro-Am gentleman driver Hedlund is another regular IMSA and PWC competitor and more recently has contested the European Le Mans Series. 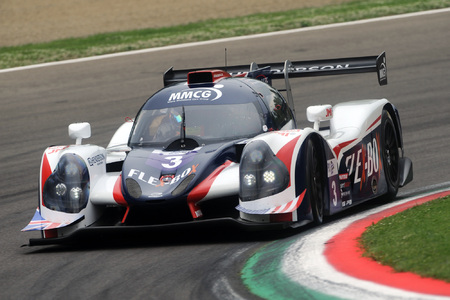 “My son, Alex, competes for United Autosports in the European Le Mans Series and he leads the LMP3 championship having won the opening two races. He can’t compete in this race because he’s over qualified [graded gold], it’s only open to silver and bronze graded drivers. Due to my age, I’m a silver, and so when the opportunity arose with Zak [Brown] and Richard [Dean], I jumped at it. I’ve spoken at length to Alex about how to make an LMP3 car work – he seems to have got the hang of it pretty quickly. I’m essentially racing for fun but inevitably it’ll turn into something competitive and serious because it should and these things do. I don’t really know what to expect in terms of a result because I don’t know what the competition will be like until the field get on the track but I believe we’ve a strong combination in terms or car, team and drivers. I’ll be disappointed if we’re not in contention for a podium.”

“I’m a very competitive person and I know Martin [Brundle] is the same so our aim has to be winning or at the very least a podium. That said, I have never raced or previously been to Le Mans. I’ve been in the simulator to help me learn the basics of the track before getting there as we don’t get that much on-track time. This will very much be the toughest and fastest track I have ever raced on and so it’s going to be a big challenge. My first laps around the legendary track will be pure excitement. It’ll be a surreal feeling sharing a car with Martin. He was a driver that I watched in F1 and nowadays listen to him commentating on F1. It will be such a privilege to drive with him. I’d just like to say thank you to Zak, Richard and Phil [Burgan of MMCG] for giving me this chance to race at Le Mans.”

“This race will only be my fourth outside of racing Stateside. I competed at Spa in 2012 less than 12 months after my first ever car race and got my ass kicked royally! But it was an experience to see just how good the ‘really’ good guys are. This year in ELMS I’ve raced at Silverstone and Imola. This will mark the first time I’ve been to Le Mans but I’ve been working towards one day competing in the 24 Hours and so this is a step towards that. I believe many of the drivers competing in our race are Le Mans rookies like myself and Guy so I don’t see why we cannot run towards the front.”

“I’ve been to Le Mans just once, in 2000, when my F2000 race team owner and his brother ran a motorsport travel agency. They sent my team-mate and I to barbeque and serve beer to the Danish race fans! The 24 Hours of Le Mans has been the biggest target on my ‘to do’ list for many years now so to race just hours before the start of this famous event on the legendary Circuit de la Sarthe is an incredible step towards realizing my dream and I’m thankful to United Autosports for the opportunity. I will not get a test in the car before arriving at Le Mans, however I’ve been on the simulator and watched on-board videos. I’ve got a strong Bronze co-driver in Mike and we’ve got United Autosports preparing us a reliable, fast race car with great engineering and strategy. Regardless of the result, this will be epic for me and I can’t wait!”

“Zak and I are really excited to be bringing United Autosports to race at Le Mans. This ACO Road to Le Mans event is fantastic for drivers wanting to get a taste of the circuit before taking on the main event. We are pleased to have Martin and Christian with us as well as welcoming Mike and Guy to the United family. I think we have very strong line ups in both our cars so I’m confident we can get a good result.”