FIRST WIN OF 2018 FOR BELL, WELLS & GRIST IN TOPSY-TURVY 4 HOURS OF SILVERSTONE 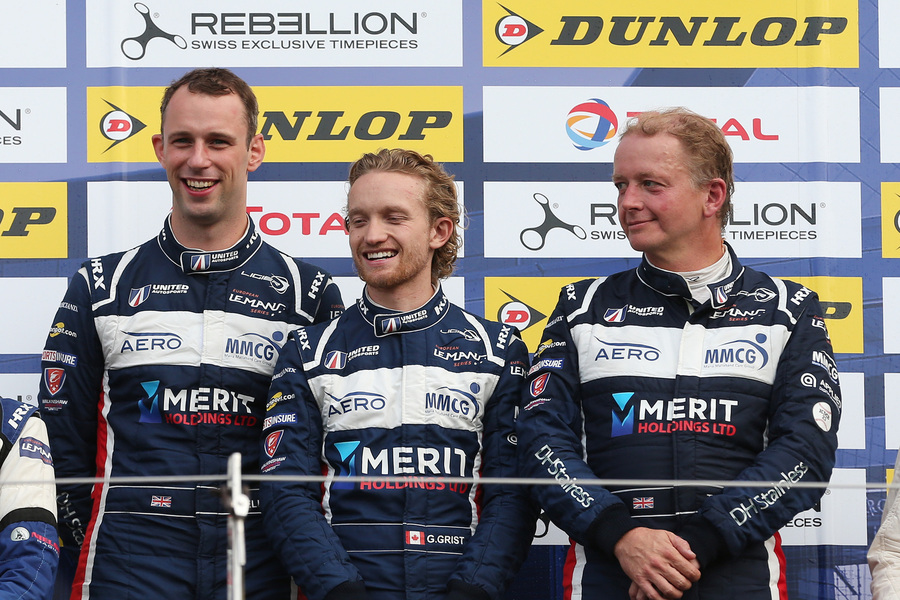 In what proved to be a rollercoaster race for United Autosports’ four European Le Mans Series cars at Silverstone, the #3 LMP3 crew of Garett Grist, Tony Wells and Matt Bell scored their first win of the 2018 season in style.

United’s three other cars meanwhile, suffered poor luck, despite all of them being in contention for podium spots in their respective classes throughout the race.

LMP2 was a struggle for the United Autosports team. The #32 Ligier JS P217 of Hugo de Sadeleer, Will Owen and Wayne Boyd eventually finished the race 10th overall, despite climbing as high as fourth during the first half of the race.

The car struggled for grip throughout the final two hours, after de Sadeleer and Boyd pushed hard early in the race to keep the car on the lead lap and in with a chance of a podium. Bad luck struck the team in the final hour though, after Owen’s stint which ended with him handing over to de Sadeleer for the run to the flag in 10th.

The Swiss was hit by a slower LMP3 class car through traffic and as a result picked up a puncture with 24 minutes left in the race, costing the team further time and forcing the #32 to come in for an unscheduled stop after almost a full lap with the puncture.

Filipe Albuquerque and Phil Hanson in the #22 meanwhile, were unable to finish. Hanson was forced to take evasive action at the start, dropping him to the back of the LMP2 pack after starting 12th. The Briton made moves during the opening hour to climb back into the top 10, before being forced to retire the car halfway through the second hour, after a clump of rubber flew into the cockpit and set off the fire extinguisher, stopping the engine.

In LMP3 the team had bad luck for the 2017 title-winning duo of Sean Rayhall and John Falb in the #2.  The reigning champions lost out on their chance of winning through no fault of their own in the final portion of the race, whilst the sister #3 Ligier JS P3 went on to win the class.

For much of the second half of the race, United’s pair of Ligier JS P3s ran in formation, 1-2 at the head of the class. The race to that point though, couldn’t have been more different for the two cars and their driving crews.

Bell, Grist and Wells controlled the race early in Bell’s stint after the halfway mark. The crew started fourth, and moved up to second after a Grist’s strong first stint. Then, Bell climbed in during hour three and made a daring pass on the leading car into the complex to take the lead. From there, Bell built a comfortable lead for Wells to defend until the end.

Over the other side of the garage, the #2 had to stage a comeback drive to make it a 1-2. Rayhall had an off in avoidance of an incident at Turn 1 at the start, dropping him to dead last. But he didn’t give up in pursuit of his first win of 2018 and slalomed through the field all the way to second before handing over to John Falb for the second half of the race.

With just the sister car to catch, Falb slowly reeled in Wells, before the final stop, which would have leap-frogged the team to the lead. But the car didn’t start, the duo losing two minutes as a result. Eventually, Falb crossed the line seventh.

Phil Hanson
“It’s been tough. We have struggled with grip all weekend, so we’ve had to push hard just to keep up with the other teams. Then in the race I had a tough start, I had to avoid an incident and went off track, dropping me to the back. Because the car wasn’t so fast I had to work hard to climb up the order again. The race was then cut short sadly, as we believe a bit of rubber flew into the cockpit and set the fire extinguisher off, killing the engine automatically. I then couldn’t restart it as a precaution, so luckily it didn’t happen at high speed.”

Filipe Albuquerque
"It’s been a really frustrating weekend overall for me and Phil. We haven’t quite had the pace and we had that issue with the engine getting killed in the car during the race so I didn’t get a chance to drive. But we won’t give up, we’ll push hard to improve and learn from this weekend. We hope for a better result at Spa."

Will Owen
“I would say that for me this weekend has been enjoyable. I’ve learnt a lot and have been involved in working on the car. On Friday I thought we were in good shape, the car was a little loose but great to drive. I’ve got lots of questions and no answers. I’ve never pushed so hard in my life, and I don’t understand where the difference is to the other cars. They were still driving round me, so I have work to do, I need to understand that. Everyone worked so hard, so I have to thank the United guys. It’s been fun, but frustrating.”

Hugo de Sadeleer
"I think we have a lot of positives to take from this weekend, as we fixed a lot of the issues we were having earlier in the year. We didn’t have the position we’d have liked in Qualifying, we had pace, but we tried to make sure that the car would ease into the race. Unfortunately, though it was difficult to drive, loose on the rear. In traffic it was nice, but overall it was tricky. Then at the end I got tapped by an LMP3, who turned in on me. It was a real shame, we could have scored some real points."

Wayne Boyd
“It wasn’t the result we wanted, and what we hoped for after practice. We felt that our race pace was really good. But we didn’t get what we wanted. Hugo had a great start, made up places, and I was able to get up to fourth. Will had to struggle with the car after that and fuel save, then we had a puncture. Personally I was happy with what I was able to do, I’m still learning but I upped my game. There are positives, we’ll keep pushing.”

John Falb
“Jeez we need a break here. Once again Sean did a mega job, brought the car in second. We expected to leap-frog the #3 car at the final stop, but when we tried to start the car it wouldn’t fire. We got two more races, we have to go win them.”

Sean Rayhall
“It was flat out. I got ran down to the apex of Turn 1, and I had the choice, wreck two cars or myself, and I chose myself. After that I was able to work my way through the field, so it really sucks because in the end we were in striking distance. We had a starter malfunction, and that cost us. It’s frustrating but top job by everyone at United, I wanted to turn the season around for them, but we couldn’t this time. We need to win at Spa.”

Matt Bell
“The first thing to say is that Garett and Tony did a brilliant job today, faultless stints from both of them.  We’ve worked so hard with the whole team to produce a result like this but ultimately they both had to deliver their best and they did exactly that. After a season where things so far just haven’t gone our way in the ELMS this does feel a bit special, and I hope a turning point.  Huge credit has got to go for the way that ‘Doc’ Bunkhall delivered the strategy and for the preparation of the car by the whole team - this is a great return on the efforts they have all made. As for the race, Garett gave me the car in really great condition and I felt I could push immediately, when the opportunity to attack came it gave me all I needed and I could pull away, and hold the team car when that attack came.”

Tony Wells
“It was fantastic to get the win, particularly here where my luck hasn’t often been that great! While it’s great to get a car handed over with a good lead and in great condition after the boys both did amazing jobs earlier in the race it still a position that has its challenges, managing performance and nerves, knowing that the second place car was closing, it was a gap I could manage, but you are always aware of it. The car was 100%, the strategy was excellent, the whole team has worked so hard for this and to get the win is just wonderful.”

Garett Grist
“That was certainly my best stint in the ELMS, the starts in these races are always very tight, I managed to steer clear of the mayhem and use the gaps that opened up, fourth to second on the first lap but could see that the leader was pushing very hard, perhaps a bit too hard. We’d talked about strategy, in particular tyre management, and this was a great example of why that proved to be important, I was immediately into tyre management, making sure I wasn’t overly aggressive but keeping up the pace. I could see the car ahead was leaving black marks everywhere and sure enough he was struggling by the end of the stint and I could hand over to Matt in sight of the lead."

“I must congratulate Matt, Tony and Garett on a fantastic drive today at Silverstone. But the other cars crews were so unlucky – we could have definitely had a 1-2 in the LMP3 class today.”

“The #3 crew really deserved that. It would have been a tight race at the end with the #2, if it weren’t for the issue at the final stop. And the #2 crew had a shorter stop to do at that point, so they probably would have jumped them. But it’s great to see them win, though I’m disappointed it wasn’t a 1-2, as it looked like it would be for almost the whole race.

“I must also note that Sean Rayhall’s drive from dead last to second in his stint was masterful, full credit to him for that. It’s something you don’t see often in a field of both quality and equality. He shone.

“In LMP2 we can’t seem to do much right at the moment. Even at the end we thought we had the fuel strategy right, but instead had a puncture. We won here last year, so this sort of result is disappointing. The car was hard to find a good balance with, the engineers made a good job with what we had strategy wise. Back to the drawing board.”