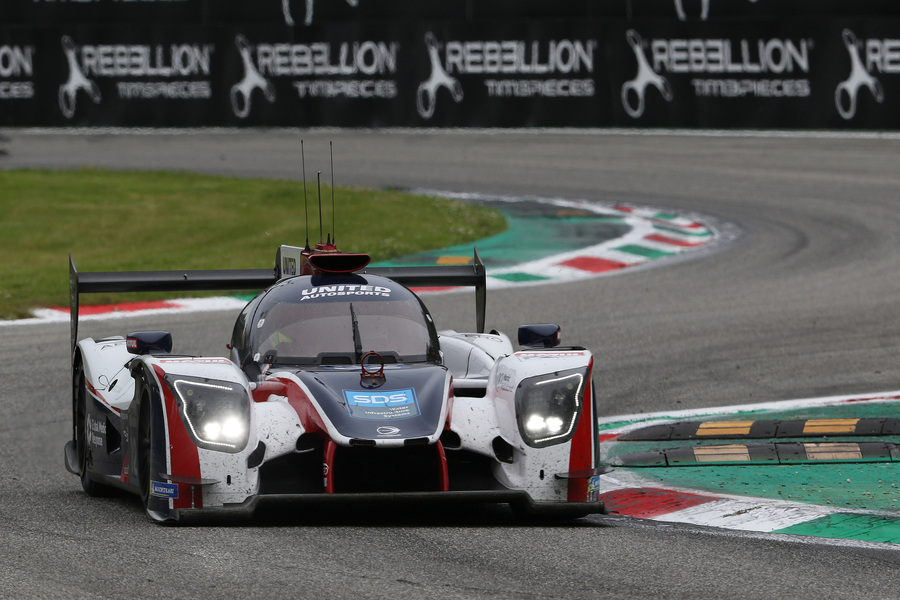 United Autosports scored a double podium today (12 May) in the second round of the European Le Mans Series as both their LMP2 and LMP3 teams finished third at Monza.

Phil Hanson and Ryan Cullen were tasked with starting the race for the #22 and #32 crews. Phil lined up eighth on the grid after Filipe Albuquerque’s qualifying efforts were ruined by a red flag in the dying moments of Saturday’s session, while Ryan Cullen started one spot behind him in ninth after Alex’s qualifying the day before. The pair made a good start, battling with the cars around them and both drivers were up two places each by lap five. The pair maintained their positions until lap 17, when Ryan made his way past Phil. Phil was the first to pit, taking on fuel, while Ryan pitted a lap later. A delay in Phil’s pit stop dropped him to eighth place, while Ryan resumed in sixth. Throughout his triple stint, Ryan made his way through the field and up to fourth before pitting again and handing the #32 over to Will Owen, who had returned to the team for the 2019 ELMS season. With two and a half hours left to run, Phil pitted once again and made his way back out for his fourth stint.

Will maintained fourth place at the beginning of his first stint, but swiftly moved the #32 up to second by the end of his second stint. By this point, the two United LMP2 cars were running second and fifth, Phil Hanson having recovered a number of places throughout his five stints. With Alex now on board the #32, he set about defending from the car in third place. Ultimately he was caught on lap 115 and was passed by the Idec car dropping him to third place. Phil meanwhile handed the #22 Ligier over to Filipe Albuquerque with one hour and 10 minutes left to run, resuming in fourth place, a position Filipe maintained until the chequered flag.

Garett Grist and Christian England lined up sixth and 11th respectively for the 4 Hours of Monza ELMS race earlier today. Both had great starts with Garett running as high as fourth by the second lap. Christian had also moved the #3 Ligier up to ninth on lap two. Unfortunately the pace of the Normas was too strong for Garett to maintain fourth, running in seventh until pitting on lap 32 and handing the #2 over to Wayne Boyd. Christian pitted the #3 a lap later, but unfortunately was unable to restart the car leading to a lengthy pit stop, which included pushing him back into the garage while the problem was investigated. After 37 minutes in the pits, Christian resumed with a new started motor fitted, albeit 20 laps down. Wayne pitted on lap 69 from second to hand the #2 over to Tommy Erdos who had some great battles on track. Christian meanwhile had pitted with one hour and 50 minutes remaining to hand over to Mike Guasch, the pair now using the time as a test session. Unfortunately Mike had a few trips into the gravel, one of which caused and FCY but crucially they didn’t lose any positions. With 45 minutes remaining, Tommy pitted for a final fuel stop and rejoined the track in fourth. A spin for the second placed car ahead promoted Tommy to third, a position he maintained until the flag. Mike Guasch ultimately crossed the line in 10th place. This weekend marks the second consecutive year the United Autosports LMP3 team finished on the podium, which this year was a Ligier JS P3 lockout with all three top spots claimed by the French manufacturer. 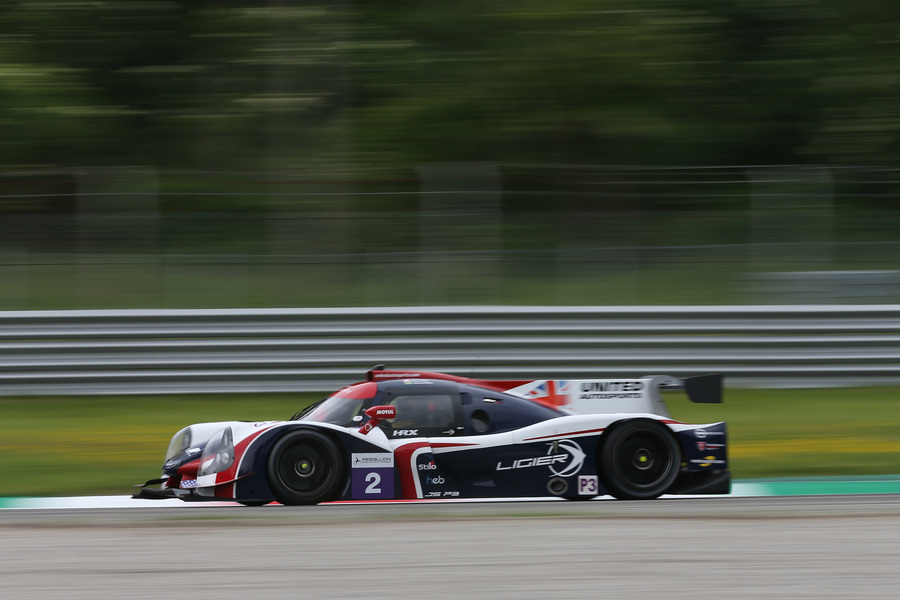 “I’m really happy. A massive congratulations to the team who did a great job today. And to my two co-drivers who were mega. The car was one of the quickest cars on track throughout the race, which put me in a great position. It was then just a case of a fight for the podium positons. I thought we might be able to keep the Idec car behind but I got unlucky in traffic and lost the second place spot but then it was great to bring the car home for the team’s first podium of this season.”

“Today was a really good result. I’m really happy to get it so early but I knew we had a good car and I was just confident for the race and confident in my team mates from their pace. P3 is a great result. The start was really good. I had a good battle with Phil and when I got past him I just got my head down for the first stint. The safety car played perfectly into our strategy so really happy with my first podium with United."

“The race was a lot of fun. I joined in P3 but in reality it was P2 when Ryan got out the car. The Ligier was great and it was balanced really how we wanted it. I pushed really hard and we seemed to have really similar pace to the leaders but really I have to say a huge thanks to United for, first of all, the opportunity to be back here because it’s been a lot of fun and I’m so happy to be back with a team that is on another level with everything they do. I really have to thank the crew on my car too. It’s nice to work with Ryan and Alex as well. Alex closed the race out in a solid third which is a great result. I think we really maximised the car as well as we could have so let’s keep going.”

“Fourth place seemed out of our reach earlier in the weekend and I think if everyone else’s race had gone to plan I don’t think we would have been that high up. We have struggled with pace this weekend, even against the sister car. We’ve done a lot of work to try and figure out what the issue is but in terms of the championship we are still in the hunt as the points all count towards the end goal. We need to stay consistent. We have our stronger tracks coming up where we have a good set up, but in total today we drove to the best of our ability.”

“P4 actually is an incredible result with Monza not being the strongest track for us. The team did a really good job and with fourth place we should be really happy because we really didn’t have the pure pace for that so congratulations to the team. we will move onto the next one and from now on theoretically we should be in a much better position with the package we have and we should be much more competitive compared to our rivals. Bring on Le Mans.”

“On Friday I would have taken a top five with how off pace we were, but we tried a couple of things that worked which I think shows a lot about the team around us. Even when you have a rough start, everyone is smart enough and knows enough to have the confidence to put a set up on that they think will change a weekend and that’s what we did. There’s a lot of work to do between this race and the next to find out how we can get a little bit more pace but an awesome job by Tommy and Wayne and it’s great to get another podium at Monza. We have much stronger tracks coming up for us so we will look forward to those.”

“I’m thrilled to be part of a podium with United. That was our aim at Paul Ricard and we were so disappointed it didn’t happen. We have such a good team – great drivers, mechanics and engineer and the car didn’t miss a beat so well done Simon, Ollie and the crew for giving us a great car. We’ve still got a bit of work to do on the handling front but Wayne did a great job in qualifying and Garett’s stint was great – we were in with a shout from the word go today so I’m just really happy to be able to contribute to a podium. The whole team deserves it.”

“If someone told us yesterday we were going to get a podium today we would have definitely taken that. Fantastic job by Garett, Tommy, Simon and the boys in the pit stops, it was Simon’s strategy that got us this podium so shout out to the whole crew.”

“It was a bit of a rough race. We didn’t qualify great but that’s ok. We were doing well at the start, picking up the pace and Christian was picking people off and was in a good positon. He came in for our first pit stop and we had an electrical failure so we basically lost 20 laps taking the time to repair it. We were behind so we decided to just use the race as a practice session so Christian stayed out for the rest of his stint. I got in and the set up caught me out and I stuck it in the gravel on about my third lap, but it was fine, we were already down so we didn’t lose anything. Other than that I think we learned a lot and we ended up 10thso we still got a point and you can’t complain about that. Onto Barcelona."

“When we came in for the first pit stop and tried to start the car again, I couldn’t. I think we eventually found out that the starter motor had burned itself out so that took some time to repair. But the positives are that the car was good, we had good pace. We made a couple of changes over the weekend and the car was coming to us. The start was mayhem into turn one but I think we made a few places up in my first stint. Mike jumped in and finished off. His pace was pretty strong so it’s a case of what could have been. But it’s been a good weekend for the team, two podiums and a fourth place isn’t too bad.”

“Our first ELMS podiums of 2019 – fantastic. The team did a great job today, it’s just such a shame that Christian and Mike had their issue otherwise we could have been on for four great finishes. Congratualtions to everyone who has worked very hard this weekend.”

“Podiums in Monza were great results for both our LMP2 and LMP3 teams. It felt a little like we had lost our way in both categories at times in the run up to the race so credit to all the crew and drivers who remained positive throughout the weekend. The team worked hard to come up with solutions and the right direction and the drivers delivered when it mattered. There is something quite satisfying when you have to fight hard to get the rewards.We look forward to Le Mans now.”