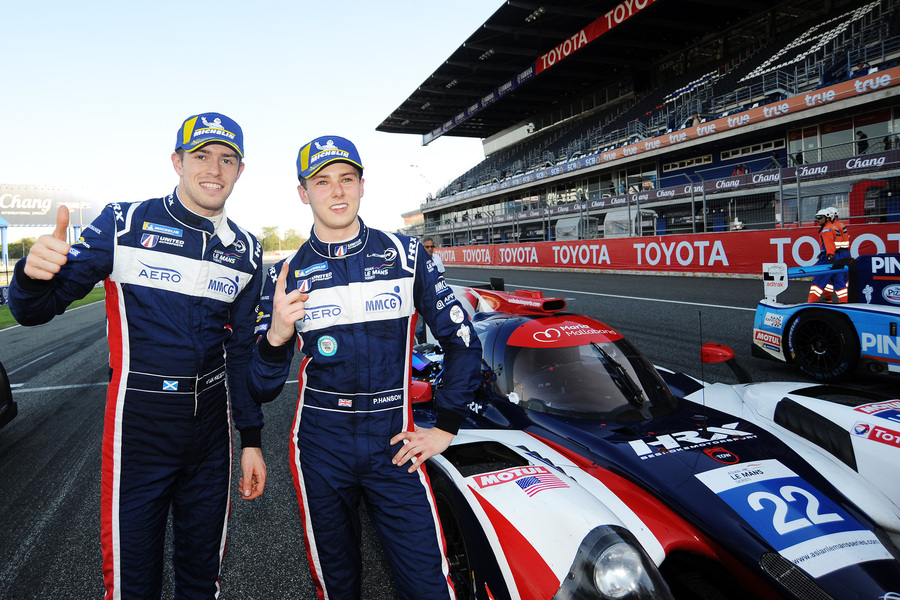 United Autosports scored its maiden Asian Le Mans Series outright race victory in dominant style in the 4 Hours of Buriram today (12 Jan), the third and penultimate round of the championship. #22 Ligier JS P2 Nissan of Phil Hanson (GB) and Paul Di Resta (GB) recorded an emphatic near two-lap victory staged at the 2.83-mile Chang International Circuit in front of a NUMBER-crowd on “Children’s Day” in Thailand. The British duo, who had finished second in the previous two races, now have a healthy 18-point advantage in the series with a maximum of 26-points on offer in the finalé staged at Sepang on 24 February. Meanwhile Wayne Boyd (GB), Chris Buncombe (GB) and Garett Grist (CAN) earned their first and the Anglo-American team’s second consecutive LMP3 class win in stunning style from pole-position and having recorded the fastest race lap. In a race staged in ambient temperatures of well over 30C, in stark contrast to the near freezing conditions of the previous race in Japan, #23 Ligier of Patrick Byrne (US), Guy Cosmo (US), Salih Yoluc (TUR) finished third in the LMP2 Am class – sixth overall – their Ligier down on power – while Matt Bell (GB), Kay van Berlo (NED) and Jim McGuire (US) recorded an unlucky fifth place. Today’s results mean United are in contention for all three highly-sought automatic entries to this year’s Le Mans 24 Hours that are on offer for the LMP2, LMP2 Am and LMP3 championship winning cars. The #23 now lies second, nine points down in the Am standings, with the #2 second in the LMP3 title race, eight points off the lead, with the #3 on 43 points.

#22 (PH) & #23 (PB) started from second and fourth places, #22 dropping to P3 at the start but led after six minutes with #23 P5 (P2 in Am class) – #22 impressively extending its lead to 34 seconds after just 30 minutes, #23 moving up to P3 overall and Am class lead after 34 minutes. At one-quarter distance (39-laps) and with all opening scheduled pit-stops completed, #22 (PH) led overall by 41 seconds with #23, now with Yoluc aboard, continuing to head the Am class in P4 overall before being given a drive-through penalty pit-stop violation.

After 90 minutes, #22 led by 81 seconds with #23 now P2 in Am (P5 overall), Yoluc encountering a loss of power while the pole-starting #24 ran P2 and out of sync with pit-stops with the leading United Ligier. Moments later the race’s first – and only – Full Course Yellow occurred, #22 and #23 both benefitting from excellent pit wall strategy and pitting with the race neutralised. #22 led the #24 by 46 seconds at mid-distance (77-laps) with #23 P5 overall, second in class, having served a second drive-through penalty for contacting the now Am class leading #4 .

Hanson finally handed over the leading #22 to Di Resta after a marathon 143 minutes stint, having led from lap four, in plus 32C ambient weather conditions – now with a 39 seconds advantage – while the #23 followed the sister Ligier into the pits with 96 minutes remaining, losing time in the garage during its scheduled stop in an unsuccessful attempt to rectify its power problem, Cosmo resuming P6 overall/P3 in class. With 60 minutes remaining (117-laps completed), #22 led #24 by 55 seconds, the latter losing time with a spin and subsequent puncture. #22 made a pit-stop with 47 minutes remaining, Hanson having to take over due to Di Resta’s regulation restricted driving time – #22 ultimately taking the chequered flag almost two laps ahead after 158-laps – Phil taking on a splash of fuel with less than two minutes of the race remaining.

#2 (GG) and #3 (MB) began from first and fifth places but with a little over 5 minutes gone, #3 and #2 lay P1 and P2, positions they maintained until their first scheduled pit-stops on the hour, Buncombe (#3) and McGuire (#2) resuming P1 and P2 respectively. #3 lost the class lead approaching mid-distance moments before serving a drive-through penalty for exceeding track limits, resuming P2 – 26 seconds down on the class leading #13 – #3 running P5.

Van Berlo took over #3 with just under two hours to run while Boyd was in the #2 minutes later, leap-frogging the #13 to re-take the class lead during the pit-stop phase. With an hour left, #2 led by 65 seconds with #3 having impressively fought its way from P6 into to P3. #2 made its final stop with 47 minutes to run, Buncombe climbing back aboard, P3 Van Berlo having stopped earlier for the last time, the Dutchman’s pace restricted in the final 30 minutes due to a broken exhaust which in turn caused a gearbox issue resulting in an unlucky and unrepresentative P5 finish with #2 over a lap ahead of its rivals at the finish.

Phil Hanson
“It’s great to win my first Asian Le Mans Series race and in doing so extend our championship lead – a very pleasing way to start 2019. But funnily enough, I feel I actually drove better in Fuji – and maybe Shanghai – despite today’s result and winning margin. We weren’t fighting anyone really after I took the lead on the fourth lap and so it was a long, lonely race in many respects. Although I didn’t repeat my Fuji pole, I was very happy with P2 yesterday as I felt my driving had been a little erratic in FP1 and FP2.”

Paul Di Resta
“Consistency is the key to winning this championship and that’s what we’ve accomplished in the first three races. I only did the one stint and there were no dramas. My first time in Thailand and I’ve enjoyed it. The track is short and tight – making the race quite busy with the traffic. It has a nice flow and so is ideal for LMP2. It offered a nice challenge with some  demanding corners but I’ve always been able to get up to speed pretty quickly at new tracks. Obviously the hot and humid conditions added to the challenge today.”

Guy Cosmo
“It’s an extremely disappointing result and now we have a lot of work to do at Sepang in terms of the championship – it’s going to be a massive showdown. Unfortunately the Ligier was down on power for much of the race. I had nothing to fight with which was very frustrating plus having to fuel save in the closing stages. The previous day, I was very happy with my qualifying lap – the car’s handling was phenomenal.”

Patrick Byrne
“It’s an unfortunate end result which does us no favours in terms of the championship. Despite being overtaken by a couple of cars at the start, I brought the car in for Salih in P2 overall. But then he encountered our power problems. I liked the Chang circuit. Turns 4, 5, 6 & 7 are flat, big-turns and ask a lot from a driver but now I’m already planning for Sepang.”

Salih Yoluc
“It’s been a very tough event – I feel the car hasn’t been performing that well this week. We need to find out why and put it right for Sepang. I was given a drive-through for contact with another car which I feel was very unfair. In my opinion it was hard racing. We now must put this behind us and focus on Malaysia.”

Garett Grist
“Overall a good execution by all of the #2 crew. Matt and I were comfortably in one-two early on and it remained that way throughout out stints at the beginning of the race. My first time here and I loved the circuit – reminds me of a kart track the way you can toss the car over the kerbs. Now very much looking forward to Malaysia.”

Chris Buncombe
“Very happy to get the victory. I picked up an unfortunate drive-through for overtaking off-track which was caused when another LMP3 car had a ‘moment’ in front of me forcing me wide. My last stint at the end was managing the gap to the car behind and not making a mistake. I’ve enjoyed my first time in Thailand. I like the track, my favourite one so far in this series, simple in terms of the layout but challenging as it’s easy to give away time.”

Wayne Boyd
“Over the moon with the win and much needed to get our championship aspirations back on track. I was delighted to claim the additional point for pole yesterday, managing to hook up a good lap and so it’s been a great event for me personally. I was really happy with my stint and to record the fastest LMP3 lap of the race. Couldn’t get much better really!”

“Gutted to miss out on the podium – we all worked hard for a good result. My stint was tough on second stint old tyres and up against a lot of pro drivers – I had to work like hell! But I brought the car home for Kay only for an issue at the end to restrict our pace and drop out of the top-three. Looking forward now to Malaysia.”

Matt Bell
“I had a great start again, into second then inherited the lead very early on and went on to lead my entire stint.  We were fighting for a podium for much of the race so the end result is very disappointing. We had gambled and ran just one set of [new] tyres in qually. I had been P1 until everyone else bolted on a second set. It was a strong team performance. The strategy looked set to pay off until the closing stages.”

Kay van Berlo
“I got in to the car when placed sixth and brought it up to third, the car felt really nice. There was a strange sound and the gearbox temperature went up seven laps into my second stint, and became stuck in fourth gear when I was in a safe podium position. Additionally, the drinks bottle wasn’t working. I’d previous experience of Buriram, scoring a Thailand Super Series class podium in a Lamborghini Gallardo GT3 here last year.”

Zak Brown, Team Owner and Chairman, United Autosports:
“Awesome for Phil and Paul to win overall and for another LMP3 class victory. It’s great to be heading for the last race in Sepang bidding for three championship titles. This is what we set out to achieve in our maiden Asian Le Mans Series season. There’s everything to fight for in all three categories after these tremendous results for the team in Buriram.”

Richard Dean, Team Owner and Managing Director, United Autosports:
“Scoring our team’s first outright win and a second class win in United’s first-ever race in Thailand is a tremendous performance. Phil dove really well in the heat and was ably backed up by Paul to record the #22’s win. Wayne, Chris and Garett each did a great job to earn us another LMP3 win. I’m disappointed for the #23 guys who had to endure a tough race when it seems a sensor issue shut the car down into ‘safety mode’ during Salih’s stint early on. We will need to do a full analysis of the data to learn what caused it. Additionally, it would have been fantastic to see Jim [McGuire] and the other #3 guys on the podium which they richly deserved but a broken exhaust overheated the gearbox compressor leaving Kay, who had driven superbly, stuck in fourth gear for the final 30 minutes.”