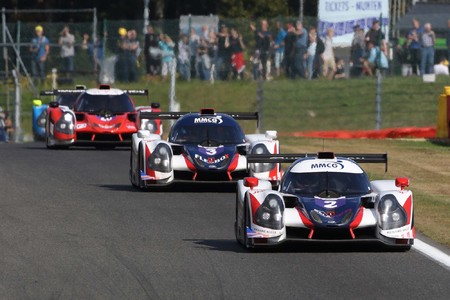 With the championship silverware already secured, United Autosports heads to Portugal and the 4 Hours of Estoril aiming to finish its maiden season in the European Le Mans Series contesting the LMP3 category in style. The Anglo-American team is out to finish off the season in the way it began the six-race series back in April with a storming one-two result. United Autosports convincingly wrapped up the LMP3 Teams’ title with a double podium finish in the previous race at Spa-Francorchamps last month courtesy of eight top-10 placings that included seven podiums and three wins – a stunning performance in its debut year racing the Ligier JS P3.

Alex Brundle, Christian England and Mike Guasch guaranteed themselves the Driver’s LMP3 championship title, when the trio achieved its fifth podium finish – that includes three wins – a record the #2 Ligier pilots are keen to keep firmly intact. Meanwhile Matt Bell/Wayne Boyd/Mark Patterson, for much of the season having suffered appalling luck, are intent on scoring the #3 Ligier’s maiden race victory of the season. With no team orders, an interesting race is in prospect around the 2.6-mile former Formula One Grand Prix Autodromo do Estoril circuit with an anticipated field of almost 30-cars.

“I’m delighted we can go racing in Estoril with no championship pressure having wrapped up the title in the previous race. We are all racers and there is nothing better than a win to sign off a great season! It’s going to be really tough as the others are still going to be fighting for their championship positions but I think we can use this to our advantage and go for a max attack approach. Estoril is a very technical and tricky track so I am looking forward to the venue in terms of pure racing. The track is much more tight and technical than it used to be and a real challenge for the driver to be accurate at high and low speed. Management of tyres will be a concern and I think the great work our engineer Gary Robertshaw does on the pit wall is going to show. My first race at Estoril was in a Radical European Masters event around 2011 and my only other time there was in 2014 ELMS.”

“We are all very much looking forward to the race in Estoril as a huge weight has now been lifted off our shoulders having already won the title. Ever since winning the first race at Silverstone, we have had a target on our backs and I’m sure we’ve all been driving with the championship in mind. It will be nice to drive a bit more at ease in attempting to finish the season on a high and close out the season with another victory.”

“I am really excited to race at Estoril this weekend.  Since we have already locked up the championship we can go into the race with less stress, but we still want to do our best and we will push ourselves as hard as ever. We have tested at Estoril this year and the test went very well. I think we are well prepared to end the year with another good finish.”

“It was great to finally break the run of bad luck and get back on the podium at Spa but we always want more so we’ll be heading to Estoril all out for the win in the last race. We were quick when we tested there earlier this year and we want to end the season on a high. I’ve never raced at Estoril, only tested there this year, so it’ll be a new experience for me which I’m looking forward to.”

“Now that we have hopefully set our bad luck to the side and managed to get back on to the podium at Spa, I hope we can continue the momentum into the final round. We have a mathematical chance of finishing fourth in the championship, which would be pretty good considering some of our results this year. I loved the track when we tested there and it’s now one of my favourites. It’s got everything from high speed braking zones, a very slow technical chicane and a proper fast last corner that goes on forever! We are going there to win to end our season on a high. We’ve had the pace to win races this season so this is our last chance.”

“After the overload of misfortune earlier in the season that essentially prevented us from challenging to win the championship, Spa’s podium let us step up a bit, moving the team up to seventh in the standings and we’re going all out to try to finish in the top-five. I love this former F1 track with one of the great neck-knocking braking zones in all of racing (Turn 1), some technical challenges especially for the no-traction-control LMP3 cars, and one of the most demanding final corners of all the European circuits. I’ve previously raced an LMP2 sportscar there before and look forward to doing well in an LMP3 too, trying to contribute to another successful United Autosports team effort.”

“We’ve enjoyed an awesome year in our debut ELMS LMP3 season but the team is hungry for more success. We’re going flat out to achieve our fourth win and being greedy, our second one-two result, which would be a tremendous achievement.”

“The pressure is off to a certain extent at Estoril, but we are still going all out for a one-two finish. The team have done such a good job all year getting us the results we have. The number three Ligier has had the pace to match, or sometimes even beat, the other car but they’ve had terrible luck. I’m very proud of all the drivers and the team for getting us this far. To be able to call ourselves 2016 ELMS LMP3 champions is a great feeling.”