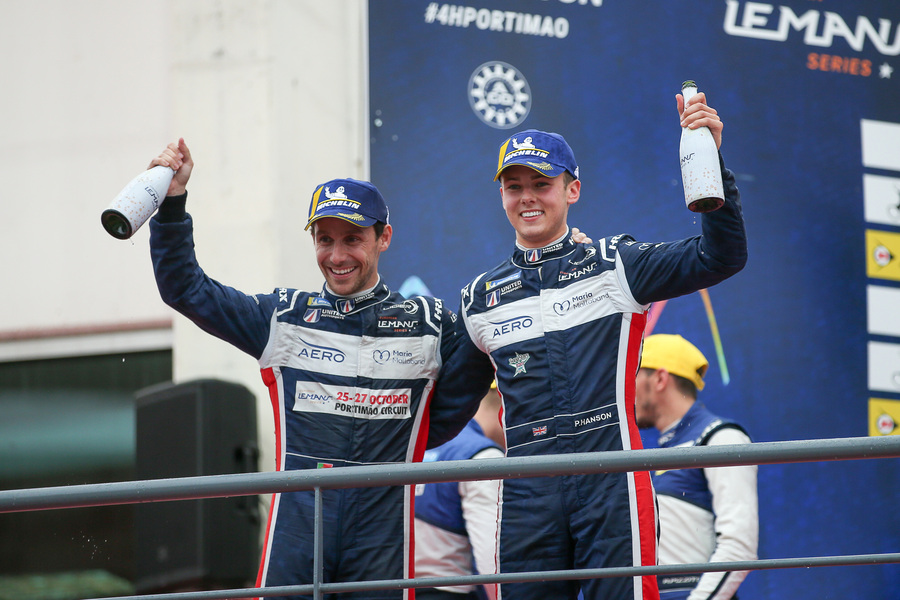 United Autosports scored two podiums in the final round of the European Le Mans Series at Portimao, as the #22 team of Phil Hanson and Filipe Albuquerque finished second and the #2 crew of Wayne Boyd, Garett Grist and Tommy Erdos crossed the line third in Portugal.*

A multi-car crash and a heavy impact on the first lap for the #3 Ligier JS P3 of Christian England put him and team mate Andrew Bentley out of contention early on in the race. Christian was extricated from the car and taken to the medical centre. He was then taken to hospital for further assessment. The team are positive of a full recovery after Christian undergoes surgery on a broken ankle.

The next event for United Autosports is round three of the 2019/2020 FIA World Endurance Championship at Shanghai, China on 8-10 November.

LMP2
Phil Hanson started the four hour race from pole position after team mate Filipe Albuquerque set the fastest time in qualifying the day before. The #32 crew lined up fourth after a great qualifying by Alex Brundle on Saturday afternoon, with Ryan Cullen starting the four-hour race. As the race began, Phil made a good start, as did Ryan, moving from fourth to third. Moments later, a multiple car accident caused a red flag almost immediately, one of United’s LMP3 cars caught up in the crash. Once the race resumed almost an hour later, Phil took the restart behind the safety car, with Ryan resuming two spots back in third. As the second placed LMP2 car pitted, Ryan moved up to second, with another safety car period closing the pack up once again not long after. Once the race restarted, Phil began to stretch out a lead over his team mate. The #32 crew were the first to pit as Ryan handed over to Will Owen from second place. Phil then pitted the #22 from the lead but stayed in the car. He rejoined in fifth with Will running eighth after getting past the #26. With 1h 45mins left to run, an FCY was thrown which saw Phil dart into the pits from the lead and handing the #22 over to Filipe Albuquerque who set out on his first racing laps on his home circuit. Will Owen also pitted the #32 from third but stayed in the car. With just over an hour to go another safety car was deployed cutting Filipe’s lead of nearly 40 seconds. He pitted the #22 and handed the car back to Phil. Will pitted the #32 at the same time and handed the car over to Alex for the final hour. With 51 minutes remaining the safety car came in and Phil resumed the race in the lead, with Alex in fifth. A great opening stint by Alex saw him move up to fourth, while chasing down the third place car. Unfortunately, Phil dropped to second as the gold-rated driver in the #28 that had to win the race to win the championship, passed him with 33 minutes remaining. Meanwhile, Alex had been battling with the #39 car and with 26 minutes left on the clock, passed them to take third place in the #32. With 17 minutes remaining Alex pitted the #32 from third for fuel only, with Phil pitting a lap later in the #22. As the chequered flag dropped, Phil brought the #22 home in second, 0.496 seconds from the winning car, with Alex finishing fourth in the #32. Phil Hanson also scored the fastest lap of the race.

LMP3
Wayne Boyd started the #2 Ligier from 10th and Christian England started the #3 Ligier from seventh after qualifying the previous day, marking our final race start for the first generation Ligier LMP3 car in Europe. Unfortunatley, moments after the start Christian was caught up in a multi car accident caused by a spinning LMP2 car. Christian suffered a broken right ankle, lower leg and foot but is awake and talking in hospital awaiting an operation. Once the race resumed, Wayne in P7 soon moved up to P5 before another safety car period. Once racing again, Wayne grabbed two more spots to move to P3 before pitting the #2 and handing over to Garett Grist with just under two hours left to run. With 1h 43mins left, and with an FCY controlling track conditions, Garett pitted the #2 and handed the car over to Tommy Erdos, who left the pits just as the FCY came to an end. With just over an hour to go, another safety car was deployed and the leading LMP3 field darted into the pits, leaving Tommy at the front of the pack. Tommy pitted with 55 minutes remaining for fuel and a new set of tyres and headed back out on track, rejoining in second. At the end of the race, Tommy crossed the line third for the #2 crew’s fourth third place of the year.*

*In the post race results, the #2 LMP3 crew of Wayne Boyd, Garett Grist and Tommy Erdos were promoted to second in the standings. Results are still provisional pending championship appeals. 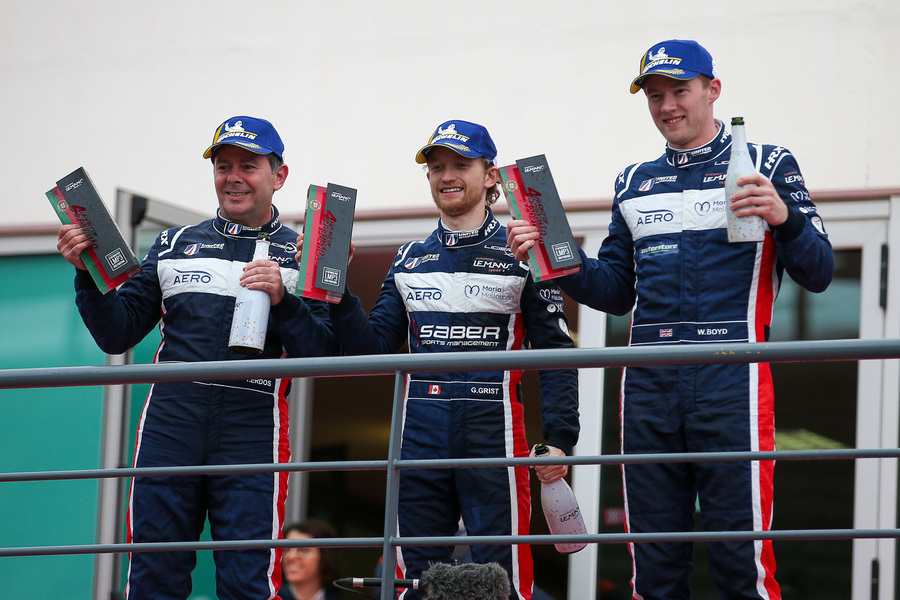 “I think the guys have done a really good job giving us a strong race car. Starting from the front is much better as you have clear air ahead of you. I think I made a good start, I didn’t get overtaken which is a bonus when starting at the front! I also did a couple of good restarts under the safety car too. Unfortunately, the safety car killed our gap. We stayed in the lead but lost almost 40 seconds. Chatin passed me through traffic. I tried to stay with him but he had the legs on me. But as a team I think we did a really good job.”

“It is a good result to end the year on. The most important thing to look at is the pace that we had. We qualified on pole and Phil got the fastest lap ofthe race. Unfortunately, the safety car ruined us. In the end Chatin was just a bit quicker than Phil, not by much but enough to pass him in traffic. He didn’t pull massively away but it was enough for track position and the win. But it is promising for the future ofUnited and for us. We have a WEC title to chase now.”

“We came out the pits behind the safety car and we’d dropped back to fifth. I set offafter the Graff car and I found a way up to third. I boxed for our timed fill stop at a similar time to Graff but they had a much shorter fill time than us which is something we will have to look at. Unfortunately, I then didn’t have enough time to catch and pass him again. But fourth place is alright.”

“I’m really grateful tofinally be in a position to be fighting at the front. I know the effort that’s gone into getting the car ready. The team are getting used to the car and so are we as drivers. We showed the pace to get better than P4 today but it’s so close at the front. All three ofus I think did a good job today.”

“I don’t understand how we lost so much time to the Graffcar but ultimately it doesn’t matter. We had good pace and we were right at the top end ofthe pack, which is where we should be. I’ve got to thank the team for this race and the whole year. It’s been fantastic and we’ve had some good success towards the end of the year.”

“I’d like to take full credit for this race. Without my two laps I don’t think the result would have been possible!! But seriously, because ofthe red flag they changed the driving times and then the strategy changed. Once I’d done my out lap, the FCY came out so we boxed under that to do a timed stop so I think I did one flying lap in total. Four podiums in six races is good, but it shows consistency pays offand we need to do more than come third regularly.”

“I had a pretty steady run. I had my head down and the car felt really good. Wayne did a great job. He put us in contention. Garett got a bit short changed with his stint but that was how the strategy worked. It’s been a great year driving for the team and with Garett and Wayne. I feel really grateful and I’m glad we could bring a podium to the end race.”

“The start ofthe race was interesting. I haven’t started a race in a while. It was a bit chaotic and then obviously, what happened to Christian wasn’t good. Get well soon to him, no one likes to see anything like that. We were able to run in third place for the majority ofmy stint and we had good pace. Overall I’m happy as we started 10th so third isn’t a bad finishing point, which was then moved up to second. Four podiums out of six races isn’t a bad tally.”

“It was looking really promising. Both Christian and I had strong pace. He did a fantastic job in qualifying, the best job he’s done all year and we both knew we had really strong race pace. Going into the race we were all confident that ifwe had a clean race we would be right up there. The team have done a great job all year and they deserved a good result. But ultimately, we didn’t make it round the first lap. My heart goes out to Christian. He’s pushed hard all year and for this to happen at the end ofthe season is really disappointing, so best wishes to him and hopefully he will have a speedy recovery and we will see him back in a car soon.”

“Firstly, I’d like to wish Christian all the best after his horrible crash. It was not a good way to start the final race of the year. Another podium for the #2 crew is a good finish to the year for the LMP3 team. The LMP2 team showed their pace that they can run up at the front. It sets us up nicely for next year in our 10th anniversary.”

“Christian is obviously at the foreront of everyone’s mind at the moment and we want to wish him all the best for a speedy recovery. It’s is such a shame that their year had to end like that. The #2 crew had another podium and just missed out on third in the championship which is a shame. The #22 car did a great job once again with pole and another podium. It’s a shame that they just lost out on the win, but that safety car ruined our advantage of almost 40 seconds. The #32 team also had a great race pace wise. Ryan had a good start, moving up to third and then both Will and Alex had great stints too. It’s just a shame that last pit stop dropped us to fourth, but it’s still a good way to end the year.”