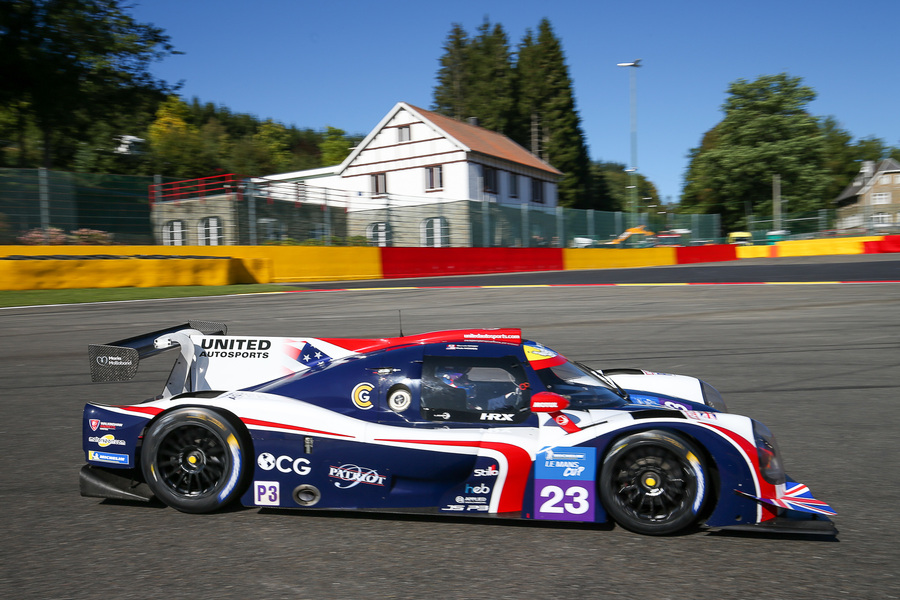 Jim McGuire and Rob Hodes lined up next to each other in 17th and 18th places respectively after qualifying earlier in the day. Rob had a fantastic start and was up to 11th in class by the end of the first lap. Jim unfortunately was involved in a first corner incident resulting in him needing to pit the #22 for bodywork repairs, including a nose change. He was then forced to serve a drive through penalty on lap 8 for causing a collision.

Rob, meanwhile continued to make up places and was running in ninth for the majority of his stint, battling with the cars around him. On lap 20, Rob pitted for fuel under safety car conditions – the result of another competitor shredding a tyre and spreading debris across the track – but rejoined the track still behind the wheel of the #23. Jim McGuire pitted one lap later in the #22 and handed the car over to Matt Bell, who joined the race 15th in class. Three laps later, the #23 pitted again for a driver change to Garett Grist, who rejoined the track in sixth. Garett was running in fifth until lap 34 when he was called in to serve a stop and go penalty for a pit stop infringement. Garett struggled with the pace of the car towards the end of the race, a possible result of damage incurred as a result of the first corner incident. Ultimately, he crossed the line in 11th 13 laps later. Matt Bell brought the #22 AERO Ligier home in 14th after showing great pace during his stint.

The championship now moves to Portimao in Portugal for the final round of the 2019 season on Sunday 27th October.

“I saw a gap at the start, went for it and unfortunately went a little too aggressive and made a very stupid mistake and caused an incident. We had to change the front end and just keep going, but Matt did a great job. His pace was good when he took over. I’m very much looking forward to Portimao and reset the mistakes from this challenging weekend.”

“It was unfortunate with the first lap incident for Jim. But when I got in the car, I had to just get my head down and try and have a good stint after that. There wasn’t really anyone else around so it was pretty lonely and I was in free space the whole time I was out there. I was pretty much just circulating and thinking ahead to Portimao.”

“I had a really good start and picked up a few places. Unfortunately, at the first corner two cars came together and sandwiched me in the middle. I think I was quite fortunate to miss a few cars that were sideways at that point after an incident. We were the driving a damaged car for the rest of the race with a bad vibration and missing downforce and we were down on power on the straights. All in all, given those circumstances we drove hard and did the best we could. We almost had a good result but we had a penalty for Garett, which from what I heard was unfair. But we now look forward to Portimao.”

“Rob had his best stint in the Michelin Le Mans Cup. He did an incredible job on the start but unfortunately someone got into the side of him and damaged the front right dive plane, which hurt the handling a bit. Rob pitted from ninth and handed the car over to me. I got in and I think we were down on power to the other Ligiers so I was just holding on. I’m not sure if when Rob got hit, it broke something more than the dive plane. We then got a penalty for wheel spinning in the pit stop which I think was a bit harsh as I was careful when leaving the box. A lot of guys pulled away from the box worse than that and didn’t get a penalty.”

“It was looking to be a promising race for Rob and Garett, but they were given a penalty with half an hour left to run, which ruined their chances. Jim and Matt had a tough race, but we move onto Portimao next for the finale.”

“I think Rob had his best stint since he started racing with us in Europe here in Spa. He made a great start, stayed out of trouble as much as he could and then kept his head down and had some great battles. He handed the car over to Garett who was running in the top-five for the most part, until a penalty thwarted their chances of a great result. Matt and Jim had an unlucky race. Jim had to pit for a new nose which dropped them a lap down and the field is so strong that it’s tricky to recover from that. Matt did his usual job of putting in the laps and showed good pace and brought the car home in 14th. We are looking forward to the next and final round at Portimao next month.”