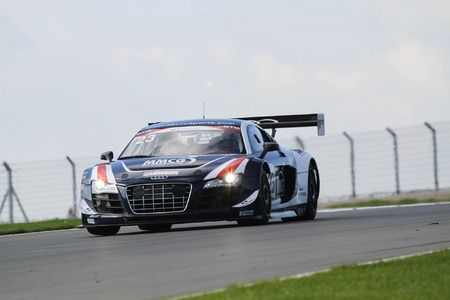 United Autosports will continue with their GT3 programme as Phil Burgan confirms his intention to return to the team in 2016.

The team, who are best known for racing a wide range of GT3 machinery, will also enter the Audi in four GT Cup rounds for Phil as they return to the championship for a third year running. Phil raced the Audi in a full season of the GT Cup last year, scoring 10 podiums and coming third in the GTO class. United Autosports were also crowned GT Cup champions in 2014 with Jim Geddie. Phil has yet to decide if he will race on his own, or if he will race with a pro driver in the pit stop races.

United Autosports’ GT3 programme will run alongside the team’s debut in the European Le Mans Series and their packed historic event schedule in 2016. The team will begin testing with Phil and the Audi in February in preparation for the first round of the GT Cup at Donington Park on 23-24 April.

United Autosports campaigned a brace of Audi R8 LMS GT3 sports cars when the Anglo-American team raced for the first time in 2010. The team has gone on to contest numerous championships and prestigious races since then with the Audi, including the FIA GT3 European and British GT Championships, GT Cup plus the Spa 24 Hours, Macau GT Cup and the Intercontinental Le Mans Cup race in Zhuhai, China. The team has also attracted a host of star drivers from the world of motorsport to drive the Audi including Mark Blundell, Eddie Cheever, Johnny Herbert, Stefan Johansson and Arie Luyendyk.

“I’m delighted to be back racing after a short retirement and I’m really looking forward to working with everyone at United Autosports again. I’m excited to be entering the Le Mans 24 Hours support race with Zak Brown and also continuing with British racing by doing a few GT Cup races. I’m also pleased to be extending my relationship with the team by sponsoring their two ELMS cars.”

“I’m really excited to get behind the wheel of a modern day GT3 car again as I haven’t raced one since mid-2013 due to concentrating on the historic racing and business commitments. I’m also looking forward to racing at Le Mans as I’ve done some historic racing there and I love the track. I’m also pleased to be racing with Phil. He has a great relationship with the team and from both a co-driver and team owner perspective, it will be great to have him back again.”