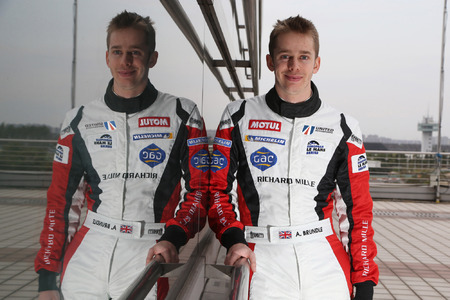 Regarded as one of Britain’s most exciting young sportscar talents, Alex will race one of the team’s Ligier JS P3 cars in the newly-extended, six-event series.

Graduating from single-seaters, Alex has vast racing knowledge under his belt and is a formidable racer. The 25-year-old has raced in prototype machinery since 2012 – his best result being a second-place finish in both the 2013 Le Mans 24 Hours and the 2013 World Endurance Championship (WEC) in an LMP2 car. Alex has contested the Le Mans 24 Hours three times and the Daytona 24 Hours twice. He has also raced in the ELMS, United SportsCar Championship, Blancpain Endurance Series, and the American Le Mans Series.

Despite his young years, Alex is already experienced in sportscar championships worldwide. He is also no stranger to Ligier, having worked with them over two seasons in the WEC and has also assisted them with the development of the Ligier JS P2 car. He also has experience racing and testing at all six circuits on the 2016 ELMS calendar but is yet to drive the Ligier JS P3.

This will not be the first time a member of the Brundle family has raced with United Autosports. The team ran Alex’s father, Martin in the 2011 Rolex Daytona 24 Hours alongside Zak Brown, Mark Blundell and Mark Patterson in a Riley Daytona Prototype. The team finished fourth overall after completing 721 laps.

United Autosports will take delivery of the first Ligier JS P3 car at the end of this year, when a full and extensive testing schedule will commence.

“I’m delighted to be joining United Autosports for the full and extended European Le Mans Series in 2016. I’ve admired the way they go racing for a long time and it’s going to be absolutely great to work with them on their new LMP3 programme. I have worked closely with Ligier in the past on their LMP2 programme and it is great to continue working with a Ligier chassis underneath me. First and foremost though, my excitement is with joining United Autosports and mirroring the ambition and effectiveness of Zak [Brown] and Richard [Dean] in the delivery of their previous motorsport programmes which I’m sure will continue into their 2016 ELMS campaign. The JS P3 will be new to me but I’m keen to get on top of it as quickly as possible and assist the team where I can. I’m sure this is the start of a great partnership.”

“It’s great to have Alex on board for 2016 to lead the team in our debut in the ELMS. He’s got a strong racing history that will benefit both him and United heading into a new era for us all. His knowledge of LMP racing and the circuits on the ELMS calendar will stand us in good stead for the year ahead. I can’t wait to see how he gets on.”

“We are thrilled to have Alex join us for our debut in the European Le Mans Series. He is fast and reliable and will bring a huge amount of knowledge of LMP racing to our team and we are looking forward to working with him on the development of our LMP3 programme. We worked with Alex’s father Martin at the 2011 Rolex Daytona 24 when he finished fourth alongside Zak, Mark Blundell and Mark Patterson so this will be really interesting for us to also get to work with Alex for a full season. I believe Alex will be a perfect fit for the team and we can’t wait to get started.”

“We’re very pleased and excited for Alex to be joining forces with United Autosports. Zak and Richard have developed an impressive team in recent years with strong infrastructure and ambitions. They’re determined racers first and foremost, along with having all the necessary motorsport credentials in place for a strong future. Just our kind of people”