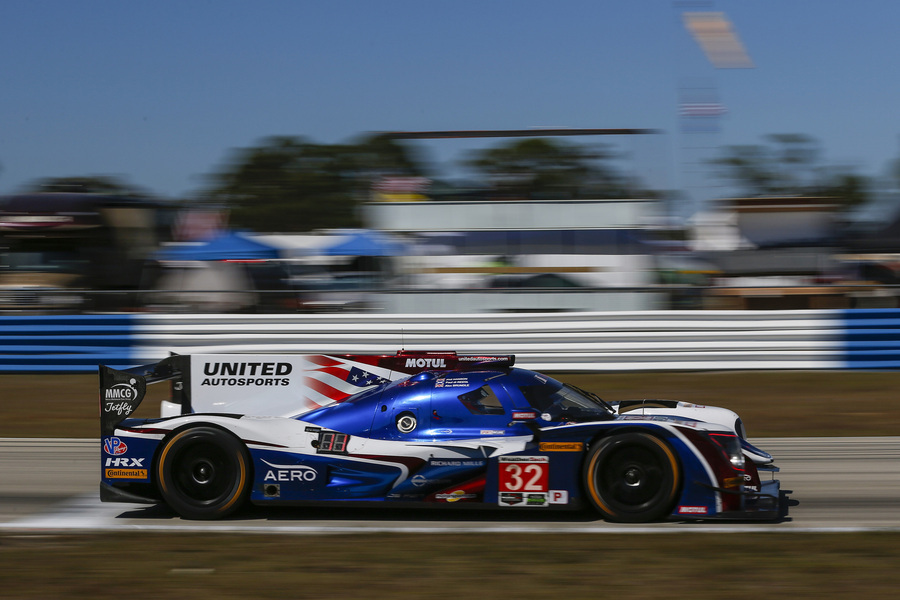 The Hanson/Di Resta/Brundle Ligier started from the seventh row of the 43-car grid after Paul was handicapped with a down on power engine in qualifying on Friday afternoon necessitating an overnight engine change – only the second time United had ever needed to change a Gibson unit since the team began its LMP2 programme 13 months ago. Paul took the start at 10.40am (local) yesterday morning and ran just outside the top-10 in 11th before pitting to Hanson at 12noon having been scored as high as fourth twice. A solid double-stint from Phil saw him hand over the Ligier to Brundle in ninth but despite his best efforts, Alex went a lap down to the leading DPi category cars with three hours gone. United nevertheless already led the LMP2 field which were clearly at a massive speed disadvantage compared to the factory Acura, Chevrolet, Mazda and Nissan DPi cars which comfortably filled the top-nine places ahead of Brundle – a fact underlined by a one-second time difference in fastest race lap times.

Ninth-placed Brundle pressed on impressively, setting the car’s fastest lap with 3.5 hours gone (lap 105), and looked set to benefit 30 minutes later from the race’s second Full Course Yellow combined with superb team strategy, to get back on to the lead lap. But just as the race was about to re-start Alex, who had been forced off line to pass GT cars, spun due to having dirty tyres at Turn 17 so remained a lap down when he finally managed to get the Ligier fired up. However, the strategy worked perfectly at another Full Course Yellow after 4.5 hours to get the lap back successfully. Di Resta was back in the Ligier at 4pm with the ambient temperature now approaching 30C and ran sixth during an exhausting strong triple-stint.

Hanson took over the Ligier at 6pm in fifth and brilliantly moved up to third before the faster pole-starting DPi car powered ahead with four hours remaining but nevertheless gave the car to Brundle in third during the pit-stop phases with three-hours remaining. Alex once more lost out to the quicker DPis finding himself frustratingly relegated to sixth place while Di Resta, having taken over from Brundle approaching 9pm, lay just nine-seconds off the lead with an hour remaining following the race’s 11th Full Course Yellow. Paul had impressively moved into fourth position and was challenging for third but slipped back to fifth – cruelly losing the LMP2 class lead – with just 12 minutes of the race remaining when a late “splash and dash” pit-stop was required.

STORY OF THE RACE

“I’m extremely proud of our team’s performance but it’s abundantly clear that the LMP2 class cars are in another category [compared to DPi]. LMP2 cars cannot currently compete on development and subsequent pace. We are racing with the hope the DPi cars are unreliable. We didn’t have the speed to race them [DPi] here.”

“To finish fifth and on the lead lap on the team’s Sebring début is incredible especially considering the handicap that we are having to cope with concerning the pace of the DPi cars. All three drivers drove fantastically well: Phil was magnificent in his maiden Sebring race which was only his eighth race in an LMP2, Paul was also having his first race at Sebring, only his second sportscar race, but looks like a seasoned endurance driver, while Alex ‘subbed’ superbly for the team. Like the drivers, the team made no mistakes in the pits, every stop was perfect. I’m proud of everyone in the team but very, very disappointed in the DPi-LMP2 discrepancies in terms of performance.”

“Our car had really strong pace today for much of the race. I managed to keep things clean in both of my double stints and increased the gap over the other LMP2s despite a couple of small issues. My only frustration is the huge divide between the performance of the DPi and LMP2 cars.”

“Overall a satisfying result – fifth, and on the lead lap, is a decent result taking into account that currently it is totally impossible to race against the DPi cars. The Balance of Performance is an embarrassing waste of time – IMSA must get it sorted if they want teams from Europe to head here.”

“The first three and a half stints I did were really nice on pace. The car was handling beautifully and it was good to finish up in touch with the leaders and crucially on the lead lap. I spun when I had to jink across to the inside of the track down the back straight under FCY when overtaking the GTs after a Merc pulled out from the ‘train’. In my final stint we were still in the hunt so I just concentrated on making no mistakes to hand over to Paul to bring it home to the flag.”