United Autosports make their way to Brands Hatch this weekend (15-16 August) for rounds 16, 17 and 18 of the GT Cup Championship. 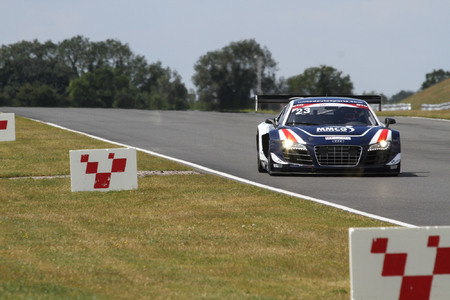 Phil Burgan will take on the Grand Prix circuit for the second time this year in his Audi R8 LMS ultra, after the championship visited the Kent-based track back in May. Phil scored a pole position and an outright second place during that trip to Brands Hatch, something they are hoping to build on this time round.

At the last round of the championship at Snetterton, the team had an unfortunate problem with broken engine mounts, which brought their weekend to an abrupt halt, after Phil performed well during a rain-soaked weekend, which included gaining pole position for the first sprint race on Sunday.

The Brands Hatch weekend kicks off with qualifying on Saturday morning at 10.45 followed by one sprint race at 15.50. Sunday’s 50-minute pit stop race starts at 10.30.

The TV coverage of the Snetterton GT Cup rounds will be shown on Motors TV on Friday 14th August at 18.55.

“I’m really looking forward to this weekend and going back to Brands. The GP circuit is very fast and demanding so the experience from last time we were there will undoubtedly help. I’m looking to get another pole there and we will be chasing for that first win.”

“We are looking forward to going back to Brands Hatch at the weekend. Phil was brilliant in qualifying in May on the Grand Prix circuit, taking his first pole position so we are hopeful of continuing where we left off last time. Another pole at Snetterton last time out shows Phil has the pace, we just have to improve on our consistency, luck and reliability a little in the races, so fingers crossed we have a good weekend.”