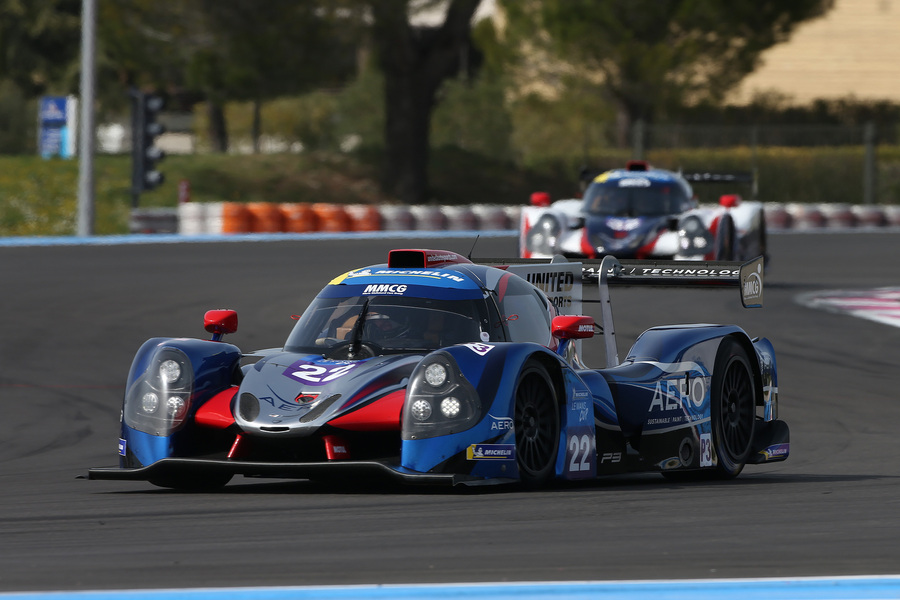 United Autosports just missed out on recording a top-10 placing in the opening two-hour race of the Michelin Le Mans Cup at the Circuit Paul Ricard at Le Castellet in Southern France. United’s trio of Ligier JS P3 sportscars lined-up in 15th (#32), 20th (#23) and 21st (#22) on the 21-car P3 grid. Hapless Husain was hit from behind on the opening lap, the #32 completing lap one in 24th place overall while #22 McGuire and #23 Meins moved up to 18th and 21st respectively. With 15 minutes gone, the United Ligiers ran in 16th (#23) 17th (#22) & 18th (#32) – the three bronze graded drivers impressively improving their laps times with every circuit which moved the trio up another two places at one-quarter distance.

Meins pitted from a fine 10th place on 57 minutes with Husain and McGuire both making their compulsory stops one-lap later from 12th and 13th places respectively after a titanic but healthy inter-team dice. With 50 minutes remaining and with all stops completed, #23 (England) lay 11th with #22 (Bell) and #32 (Raghunathan) placed 13th and 15th respectively. England was up to 10th with 24 minutes to run while Bell, who pressed the car ahead very hard for his entire stint, and Raghunathan lay 12th and 13th respectively. United was then unluckily denied a top-10 finish on the final lap, which allowed Bell, who set the second fastest race lap, and Raghunathan to snatch 11th and 12th with Christian classified 13th.

While Husain and Raghunathan were making their respective race débuts for United Autosports today, Bell was contesting his 100th race for United. He made his début for the Anglo-American team in the 2010 FIA GT3 European Championship at Silverstone (1 May) sharing an Audi R8 alongside United Autosports Co-Owner Zak Brown – the team having been officially unveiled the previous month in the presence Bernie Ecclestone, the then Chief Executive of the Formula One Group. The second Michelin Cup event is staged at Monza on 12 May and will see Colin Braun make his United race début replacing Raghunathan in the #32 Ligier who deputised for the American due to conflicting IMSA racing commitments this weekend.

“Qually was a lot of fun. Nice to get out in the dry for the first time this week. Starting near the back of the LMP3 pack, my aim was to stay clean and that worked out, even missing the usual Turn 5 melee. I hit my times, improving with every lap, so I’m happy with life.”

“Fun but frustrating. I got to know the back of Andy Meyrick’s car very well after battling with him for an hour! Our car was very fast, just brilliant, and in clean air was the fastest car out there. It was about different theories of set-up. We had a super-quick car especially around the corners while Andy had a very fast car down the straights."

“It took a couple of laps to warm the tyres in qualifying. My times came down but I suffered a little from traffic. But in the race, things were a lot better, and much more enjoyable. I had to go wide to avoid a spinning car on lap one but then settled pretty quickly and recovered well. It’s a shame we missed out on a top-10 finish right at the end.”

“It’s a decent start to the season but obviously a shame we missed out on a top-10 result. The car was good. I had a lock-up into Turn 1 midway through my stint which resulted in a bad flat-spot and effected my vision. For the final three-laps the Ligier wasn’t right, which forced me to concede places to the sister cars.”

“Great racing! I got hit from behind going into Turn 5 on the opening lap which spun me out wide. So it was a case of clawing back a bunch of positions. Qualifying was a lot of fun but challenging on the new [Michelin] tyres and in getting heat into them – a lot different to the Continentals I’m more used to in the US. It’s my first time at Ricard and it’s a wonderful facility.”

“Although I’ve raced at Paul Ricard before, this was my first race in an LMP3 car and it was a lot of fun. I learned a lot and it was a great experience. I had some minor brake issues. Fantastic racing and brilliant to race for United.”

“The Michelin Le Mans Cup is extremely strong this year and so for all three cars to finish just outside the top-13 is a solid start to our season in which we can all build on. All six drivers performed very well and made no mistakes. Christian [England] was desperately unlucky to miss out on a top-10 after a great drive by Richard [Meins]. Jim did a good job while Matt was sensational setting the second fastest race lap. Naj and Mahaveer, both racing for us for the first time, performed very well considering Naj hadn’t raced here before while Mahaveer was racing an LMP3 car for the first time.”