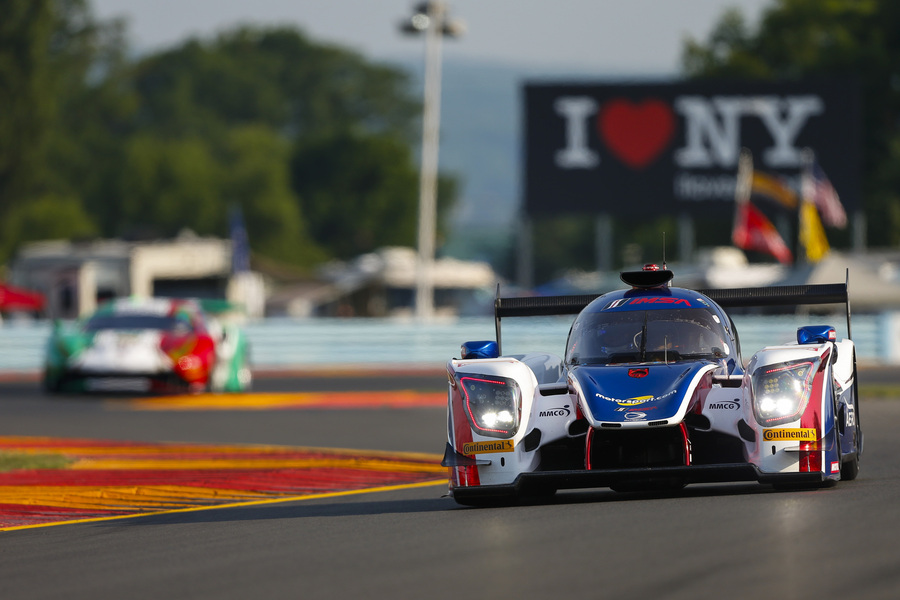 United Autosports leave Watkins Glen disappointed after a fourth place finish in the Sahlen’s Six Hours of the Glen after contact leaves the team thinking what could have been.

Paul Di Resta took to the wheel of the #32 Ligier JS P217 on Saturday afternoon’s qualifying session in the blistering heat. Paul held provisional pole position for the majority of the session, only being pipped to pole position in the dying moments by 0.006 seconds.

For race day, the pole sitter tactically opted to switch starting drivers, pushing them to the back of the prototype grid and promoting the number 32 Ligier JSP217 to pole position. Paul made a great start but was hounded by the Team Penske Acura’s in second and third and dropped to second on the first lap.

Paul pitted after his first stint at the 43-minute mark and handed the #32 over to Phil Hanson, who was making his race debut at Watkins Glen. Phil managed the traffic perfectly and maintained the team’s good position in the top four throughout his stint, regularly lapping similar times to the rest of the professional drivers in the field.

Phil handed the car over to Bruno Senna a little after midday, who continued the good pace of Paul and Phil. After two hours, Bruno handed the car back to Paul to bring it home.

Unfortunately, on lap 159, while in second place and battling with the #54 CORE Autosport Oreca, Paul was hit from behind by the Oreca whilst overtaking a slower GT car, causing bodywork damage which subsequently caused the tyre to delaminate. The team were required to make an unscheduled pit stop to repair the damage, losing precious time in what is a very competitive field, ultimately dropping from second to 10th place as a result. After the repairs had been made, Paul set about recovering places and by lap 186 was back up to third place. The incident between the United Autosports Ligier and the CORE Autosport Oreca was investigated by the stewards but was deemed to not require any further action. To add insult to injury, five laps before the end of the race, Paul was passed by the #54 Oreca for third place after losing time due to the earlier damage.

Unfortunately, it was a faultless performance by both the drivers and crew who were left ultimately unrewarded for their efforts.

We now head back to the UK to prepare for the third round of the European Le Mans Series at Red Bull Ring (20-22 July).

“My stint was pretty good. I think I made a step forward in my traffic management on the occasions where I came up against the GTs battling with each other. I was running in the top four the whole time and whenever someone caught up to me I was able to pull away and create a gap. The team did a really good job and so did Paul and Bruno. Unfortunately, during Paul’s stint the car behind us in P3, while we were running P2 seemed to misjudge his speed. I’m not really sure what went on, but he ran into the back of us, which caused the rear bodywork to be dislodged and make contact with the tyre so we lost time having to pit for that. The car didn’t even get a penalty, which I think is something the stewards need to look at. It does make you wonder what is the point in coming racing when nothing happens to those who make contact with you, causing damage and there’s no consequences. To me it was a second place and a possible victory that was taken away from us and the stewards did nothing about it. Paul didn’t put the car in reverse and drive backwards into the #54.”

“I’m disappointed with the result and that’s an understatement. We came to Watkins Glen confident that we could do well with the package we’ve got and to have it snatched away from us is hard to take. We were undoubtedly on for a podium, never mind the possible win. I was happy with qualifying and the car felt good in the race. The Penske got past me at the start but I stuck with them and I enjoyed the battles I had. Until my second stint when I got hit from behind by the #54 Oreca when going through traffic, which caused bodywork damage and affected the handling of the car due to the rear floor being damaged. I question the steward’s decision to not give them a penalty as well. The impact had a direct effect on our race result and they finished on the podium with no consequences. Despite all that, the team did a great job as always and it is rubbish for them not to come away with the result we all deserved."

“Another IMSA race and we’ve got another fourth after a fourth at Daytona and a fifth at Sebring, which doesn’t actually sound that bad but we feel disappointed as it was a perfect race from reliability, the team did a brilliant job and I don’t think we gave much away in each stop. We got hit, which caused damage to the rear. It was a clean hit from behind and it looked like a fairly blatant mistake from the CORE Autosport car, who ultimately ended up on the podium. We had good track position at that point and all three drivers had done exactly what we asked of them. While we should be elated to have had a pole position and with running in the lead three pretty much the whole race, I think a podium is what we deserved.”