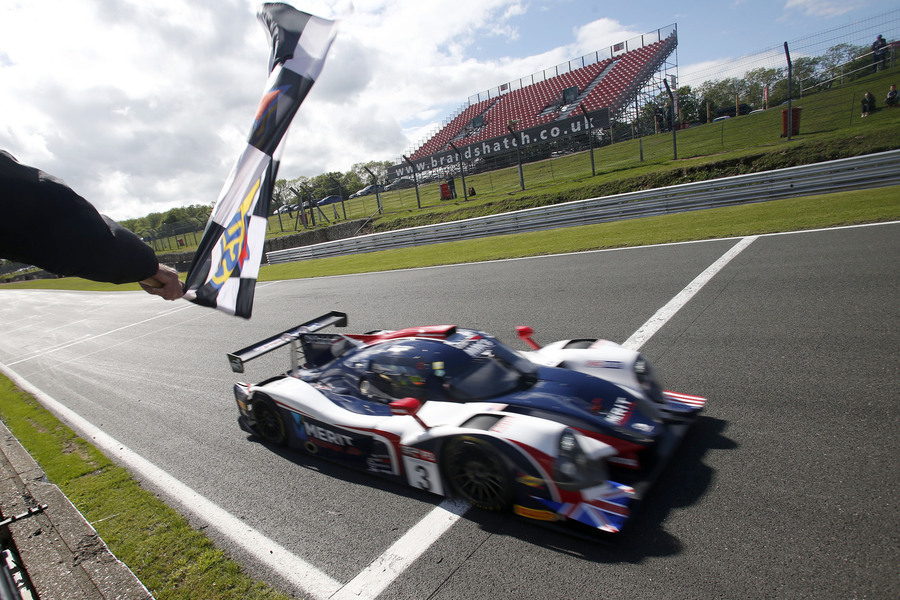 United Autosports took their first win in the Henderson Insurance LMP3 Cup Championship this weekend, as Tony Wells and Matt Bell brought their #3 Ligier JS P3 home in first place at the end of Saturday’s race (20 May). They also came second in Sunday’s race after starting third.

Tony had put the #3 Ligier JS P3 on pole position on Saturday morning, giving the Donington Park podium finishers their best chance at claiming the win. On Sunday, Tony started third, taking second place on the first lap. He drove a solid stint until the pit window opened and he handed the car over to Matt Bell. The pairing ultimately finished second at the end of the hour-long race.

American duo CJ Wilson and Andrew Evans got their first taste of the Brands Hatch Grand Prix circuit on Saturday, however a minor mistake in free practice from CJ on his LMP3 debut, saw him hit the barriers, causing enough damage to knock them out of Saturday’s running. The #2 Ligier JS P3 made it out for qualifying on Sunday morning with CJ behind the wheel. He placed the car seventh on the grid, getting quicker and quicker each lap. CJ had some great battles in the opening stages of Sunday’s race, battling with Mike Newbould in the Douglas Motorsport Ligier. As the pit window opened, CJ pitted to hand the car over to Andrew, who brought the car home in seventh.

The next rounds of the Henderson Insurance LMP3 Cup Championship will be held at Spa Francorchamps on 9-11 June. The race weekend will be held over three days as a packed calendar of racing is set for the world-famous race circuit only one week before the Le Mans 24 Hours.

“We had some interesting circumstances with red flags and weather and unfortunately I caused a red flag when I whacked the barrier in free practice, so I didn’t get the total amount of seat time I’d have liked. I have to say that the overall progress from the start of the weekend to the end of the weekend was great – it gives me some optimism that there is a chance to develop and go fight with the guys in the rest of the field. I had a good scrap with some of the other drivers during the race on Sunday, which was good. I was aware of not putting the car at risk after my incident on Saturday, but I love the Ligier JS P3 and having Christian [England] with me this weekend was very positive for my overall development so goal accomplished.”

“We had a great weekend at Brands Hatch and learnt a lot. It was good to work with CJ for the first time at a circuit that was new to both of us and in a car that CJ hadn’t raced before. Having Christian with us was a great help too. I’m looking forward to racing at Spa for the next rounds.”

“What an excellent weekend - a pole, a win and second place. I had a good start in both races, but sticking it down the inside of Alasdair [McCaig] at the start of the second race was fun! The safety car messed it up a bit for us and unfortunately the Ecurie Ecosse car got out the pits just in front of us but a second place is still a great result.”

“I’m really happy with how this weekend at Brands Hatch has gone. We made some steps forward from Donington, results and pace wise. We are definitely heading in the right direction and we are getting our head around the Pirellis too, which is good. Tony did a great job – pole yesterday and a third place start today means he’s putting us in good positions to be in the mix during the race. He’s very good at starts – when he hasn’t started from pole, he’s always made up positions, which is what you need in a team mate. We’ve just got to make sure that we execute everything perfectly to beat the Ecurie Ecosse/Nielsen Racing guys as they are very quick, but we will be back on it again at Spa.”

“It was nice to get back to winning ways this weekend! A first and a second after Monza ELMS and not being on the podium, which is unusual for us now, so I think it’s good for the whole team to get the results we did this weekend. The championship is so close – the Ecurie Ecosse car is obviously going to be strong competition as are the rest of the field. It was a tough ask for CJ and Andrew to come to the Brands Hatch Grand Prix circuit on their first weekend as a pairing. It turned into an extended test session for them, but they both made good progress in the second race so it’s all heading in the right direction. Onto Spa next!”