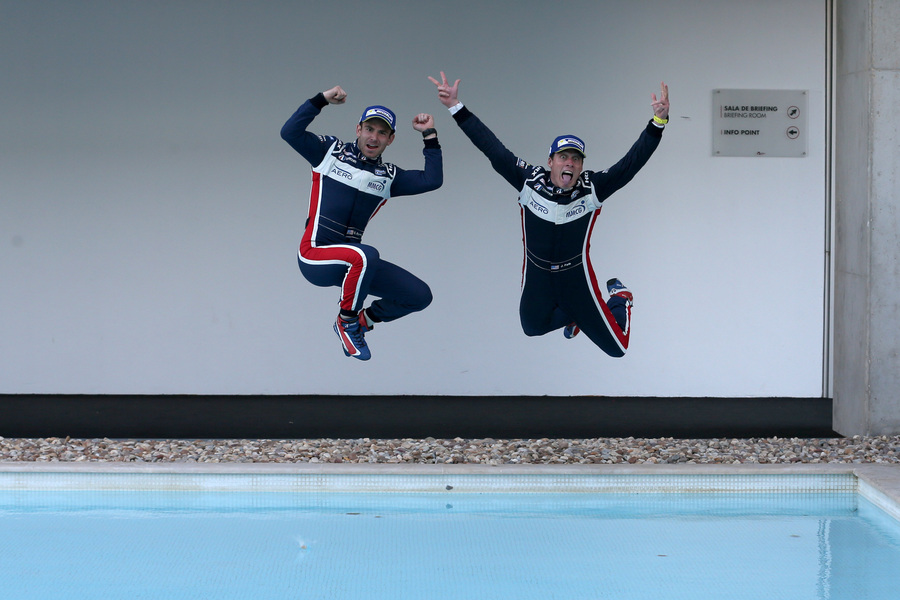 United Autosports has won the European Le Mans Series LMP3 Teams’ title for a second consecutive year – second place in the sixth and final round of the championship in Portugal today (22 Oct) also earning American duo John Falb and Sean Rayhall the Driver’s LMP3 crown as the sister Wayne Boyd/Christian England/Mark Patterson Ligier scored its first LMP3 race win of the season. But it was disappointment for the Anglo-American team in attempting to win LMP2 at its first attempt when Filipe Albuquerque/Will Owen/Hugo de Sadeleer recorded second place overall in the Four Hours of Portimão to leave the trio 12-points adrift of championship honours despite them scoring two outright race wins this season.

United Autosports has contested the ELMS P3 category for the past two years, scoring an incredible 17 top-sixes from 12 races. This year marked its first season in LMP2, creditably achieving six top-six placings. The Leeds-based team, which recorded an amazing top-four class placing – fifth position overall – on its Le Mans 24 Hour and FIA World Endurance Championship début in June, has scored eight wins in the 12 ELMS races contested to date.

Qualifying was a very fraught affair for United with red flags in the separate LMP2 (one stoppage) and LMP3 time trials (two stoppages). Rayhall clocked the fastest time in LMP3 but exceeded track limits resulting in him losing the pole lap with no time left to set another time and a back of the 35-car grid start. Boyd inherited pole but his time around the bumpy 2.78-mile track near Portimão was beaten in the dying moments.

De Sadeleer made a stunning start, taking the lead on lap two, and headed the field for the majority of the opening half of the race before handing over the #32 Ligier to fellow Portimão rookie Owen on 130mins immediately as the race went Full Course Yellow. Unfortunately, the Swiss was deemed to have exceeded the pit-lane maximum speed which forced Owen to serve a 55secs stop-go penalty dropping the #32 from first to third. Albuquerque took over for the final 58mins placed fourth but snatched second place with less than five minutes remaining, eventually finishing 38secs behind the winning car.

In LMP3, Boyd (#3) stormed in to the class lead on 43mins, handing over to Patterson (70mins) while a charging Rayhall (#2) was into second place on 100mins. Falb took over the #2 from his fellow American 30mins later under a mid-race FCY with England taking the wheel of the fourth-placed #3 Ligier. Falb survived contact and a subsequent spin but remained first after the #2’s final pit-stop with 45mins but 15mins later, England in the “sister” #3 swept ahead to score his car’s first class win of the season despite being clipped into a spin with less than 15mins remaining. United and its drivers claimed the titles by 22-points.

“What a fantastic season! To retain the LMP3 title is awesome while to have been in contention for LMP2 honours as well, in our first season in that category, confirms our team’s growth, professionalism and competitiveness. Congratulations to all of our ELMS drivers. Our guys in the Michelin Le Mans Cup have enjoyed and acquitted themselves well. It’s a great ‘feeder’ series giving drivers the opportunity to race on such iconic and historic tracks like Monza, Le Mans and Spa combined with the Red Bull Ring, Le Castellet and Portimão in an LMP3 sports-prototype.”

“It was an incredible race and a fantastic end to our season. It was a very harsh penalty for the #32 and so to finish second, so close to the winning car, shows the pace they had today. Second in the final LMP2 standings, in our first season, is a heck of an achievement. Credit goes to Filipe and the team for bringing Hugo and Will on during their first endurance season. Two [LMP3] championship wins in consecutive years is a tremendous achievement and I’m delighted the #3 car got a win at long last. The MLMC has been great for us because all of our drivers have simply loved the series. Today’s race was a fantastic end to the season for the #22 car in scoring a podium. Andrew [Bentley] had to stand in at the last minute for Shaun [Lynn] and did a great job. Jim [McGuire] and Richard [Meins] have both progressed massively throughout the season. Meanwhile Matt [Bell] jumps in the car at every race and sets lap times comparable to the race leaders."

“I’ve come into the last race of ELMS for the past three years fighting for the title and each time have finished runner-up – I’m jinxed. I had some good fights but I needed to save fuel quite a lot. I almost got a time in before the red flag came out in qualifying yesterday. We decided to stay on the same tyres. P5 was not ideal but it was an okay position for Hugo to start from.”

“My first season in endurance racing has been awesome and a lot of fun. Although a little disappointed not to win the final race, I’m still happy with second place. I was able to push really hard in my stint on new tyres and managed to reduce the gap to the G-Drive car which was a good feeling for me personally. As usual the team did a great job.”

“I was very happy with my stint. I made a good start, snatched the lead and managed to pull a gap. It was a battle out there and I survived some small contacts with LMP3 cars. Coming in to the pits at the end of my third stint was a late call because of a FCY but forgot to put the pit limiter on so I was travelling too fast for a few metres in the pit-lane. It’s a tricky track but it was a case of always pushing for the race win. I’m still pleased with the result despite the penalty.”

“Winning the ELMS LMP3 title is extremely satisfying – it’s a great series – six, four-hour races is a great formula. Zak and Richard at UA have been fantastic as have our car crew. Their professionalism gives us confidence in the car and its paid dividends for us all. Christian [England] was catching me before I made a small mistake which allowed him to get ahead.”

“In qualifying after the last red flag, I ran wide due to cold tyres and so had my ‘pole’ lap taken away which made life difficult for us starting way back on the grid today. Going through the traffic from the back was tough but the car was fantastic. The team has done a fantastic job all season and I am very proud of them and John [Falb] who has been immense.”

“My mission at the start of the race was to stay safe and out of trouble. Because of that, I lost a place at the start and another after a Safety Car. But as my stint progressed, I managed to get in to the lead and stretch my advantage. After two red flags in qualifying and with just a couple of minutes remaining, I hadn’t recorded a lap time but it all turned out well in the end with a front row spot.”

“I won the driver’s title with United last year so if our car wasn’t going to win it, then I’m happy that the #2 crew have taken the honours. We’ve had the pace all year to win races but for various reasons it hasn’t happened until now so it’s especially nice to get on the top step of the podium today. Wayne [Boyd] had a mega opening stint while Mark [Patterson] had cracking pace too. The gap to the #2 car was quite big when I got in the car but it was a case of just hunting it down.”

“Our car was average in first practice, was good by the end of second practice and for Wayne [Boyd], was excellent in qualifying. So, all three of us had a very good car to drive this afternoon and I managed to hand the car over to Christian [England] in a decent position. We’ve had some bad luck this season so it’s great to end the year with a class win.”

United Autosports brought the curtain down on its first full Michelin Le Mans Cup season by recording a podium finish in a double top-10 result in the final two-hour race this morning (22 Oct). Matt Bell (GB)/Jim McGuire (GB) were classified third while Richard Meins (GB), partnered by Andrew Bentley after Shaun Lynn was forced to withdraw, was placed eighth in the sister UA Ligier. The results combined to earn United sixth (#22), 10th (#2) and 11th (#23) in the final Teams’ standings while Bell/McGuire placed seventh with Meins, Bentley (only two races) and Lynn 14th, 20th and 36th respectively in the Driver’s division. John Falb/Sean Rayhall were classified 11th in the Driver’s championship despite only contesting one of this season’s seven races, the American duo recording a win and second place in the Le Mans “double header” in the #2 Ligier – the venue for United’s only previous series foray last year.

The latest achievements gave United a final season tally of 10 top-10 LMP3 results with the best placings of UA’s regular entries a fourth place in the #22– from today – and the #23 a sixth (Paul Ricard).

“Jim [McGuire] had an eventual and challenging stint due to two Safety Car periods while starting at 9am meant the tyres took a long time to reach a working temperature. I got my head down and came through the traffic to fourth being ultra-careful not to exceed track limits and avoid any kind of penalty. Post-race we picked up a position so to finish the year off with a podium is great. Jim has improved a huge amount as the year has progressed.”

“I’m absolutely elated to be classified third. The beginning of the race was very challenging due to the cold temperatures resulting in hardly any grip which caused me to spin a couple of times. The series is beyond exceptional for me. Hands down it’s the best series in the world for a ‘gentleman’ driver who wants to drive a ‘real’ racecar on some of the world’s greatest tracks – all of which I’d never raced on previously.”

“I ended up substituting for Shaun who had to return back to the UK unexpectedly. I had to borrow most of my race gear. My first lap out after taking over from Richard [Meins] in the race was only my 10th lap all weekend so it was a challenge. I was happy with a top-10 considering my lack of experience at this track. This was my second MLMC race of the season for United and it’s been great.”

“I made a reasonably good start and stayed out of trouble during my stint which is always my aim. It was quite cold at the beginning of the race so I had to be a little cautious. My times improved with every lap and that’s all I can hope for at a new circuit. This year has been a learning curve for me with the Ligier, it’s a serious aero car so takes time getting used to, while racing on mega circuits.”