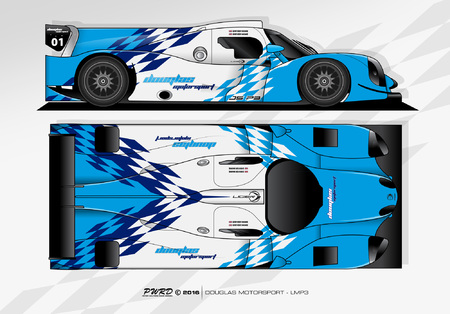 Douglas Motorsport is the latest customer for the Leeds-based team, who purchased a P3 car after attending United Autopsorts’ September test at Snetterton, with their driver Mike Newbould. The single seater and Ginetta Junior/Supercup race team will run the car for Mike in the inaugural British Prototype Cup event at Snetterton on 8-9 October. They will also enter a full season of racing in the new British series in 2017. Prior to the October race weekend, United Autosports will host their third exclusive two-day test on 3-4 October, which Douglas Motorsport and Mike will attend. The Corby-based team are yet to confirm who Mike’s co-driver for the inaugural Prototype Cup will be.

United Autosports have also delivered a Ligier JS P3 car to Lancashire team RLR Motorsport, who will enter the inaugural Prototype Cup race in October, with plans to enter the full season in 2017. Further cars have been delivered to Richard Meins and Shaun Lynn, who will race as part of the United Autosports team at Snetterton and Tockwith Motorsport, who are entering the second half of the European Le Mans Series with their P3 car.

American racer, Mike Guasch was the first to take delivery of a Ligier JS P3 from United Autosports back in April and has tested the car at circuits near his home in America.

Anyone wishing to talk about Ligier JS P3 cars or to book onto the exclusive Snetterton test, should contact Richard Dean on Richard@unitedautosports.com or 07850 350 296.

“We are going in a bit of a different direction with the Prototype Cup, but I think it’s going to be a great direction for the team. We have watched for a while the progress of LMP3 teams we know and thought now was the right time to purchase a Ligier JS P3, given the introduction of the Prototype Cup. Mike tested the car at one of the United Autosports test days and loved it. We have a few guys that are wanting to try it out so fingers crossed this is a successful new avenue for the team.”

“It’s not long now till the Prototype Cup race weekend and I’m glad the grid is filling up with the cars we have sold to our customers. Wayne [Douglas] and Mike came along to our test day earlier in September and they both loved the car straight away. A lot of people seem to have the same reaction once they have actually sat in and driven the car. It’s great that a team that has a single seater background has bought one of the Ligiers, and it will be good to see them at the first Prototype Cup event in a few weeks.”