The Toleman TG-184-02 was raced by triple World Champion Ayrton Senna during his first year of Formula One in 1984.

This chassis was piloted by the Brazilian in the 1984 Monaco Grand Prix, where he announced himself on the world stage in spectacular fashion by finishing first on the road, but classified second to Alain Prost after the race was stopped on lap 32 due to torrential rain.

Had the race continued, Senna would have scored Toleman’s first ever victory.

This chassis also finished third at the British Grand Prix at Silverstone in the same year. 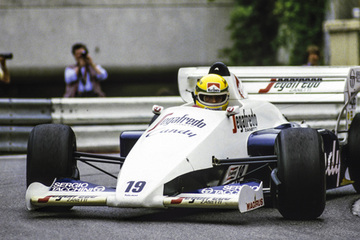