Chassis 2’s race début was at Silverstone in the non-championship International Trophy in March 1978 with Mario Andretti at the wheel but it’s maiden GP was in Belgium at Zolder, scoring the first of the six wins that led Andretti and Lotus to win the World Championship – the British constructor’s last World Championship title.

For the following GP in Spain at Jarama, JPS20 moved in to the hands of Ronnie Peterson who finished second. The Super Swede recorded podiums on “home” soil (third) and in France (second) before winning in Austria - his last ever race victory.

The Lotus was raced by Carlos Reutemann the following year, the Argentine registering podiums in his “home” race (second), Brazil (third), Spain (second) plus the non-championship Dino Ferrari Grand Prix in Italy (second). 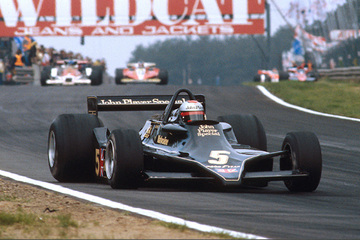