This car is one of only three works Cologne Ford Capri RS3100s built and scored two victories out of two starts in the 1974 European Touring Car Championship, winning at Hockenheim and Jarama.

These were the only victories scored by a Capri in this championship, making it the ‘hero’ of Ford’s victorious ETCC season.

This chassis also won the Deutsche Rennsport Meisterschaft at Zandvoort, with Jochen Mass and Rolf Stommelen behind the wheel.

These combined victories probably makes this chassis the most successful top-flight car in the fiercely competitive touring car arena of that year.

The last race for chassis 19997 as a works Cologne car was in South Africa, where it won its group race, beating all the GT cars. 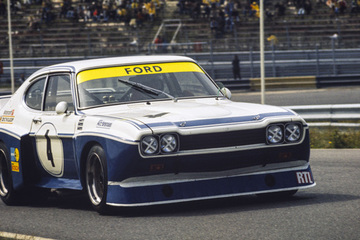