Gurney scored wins at Mosport and Mont-Tremblant in two of the three races he contested – both from pole-position – with Gethin, who raced the vivid papaya-coloured car seven times, victorious at Road America along with two further podiums in the 8.4-litre Chevrolet engined beast.

Bruce McLaren Motor Racing used this chassis as a “spare” for Denny Hulme and Peter Revson the following season while it ran in “privateer” hands in Can-Am between 1972-74. 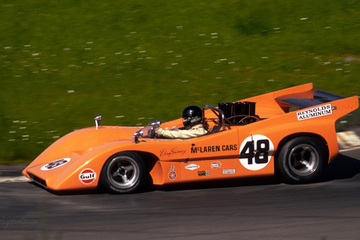